The business of climate: A look to technology 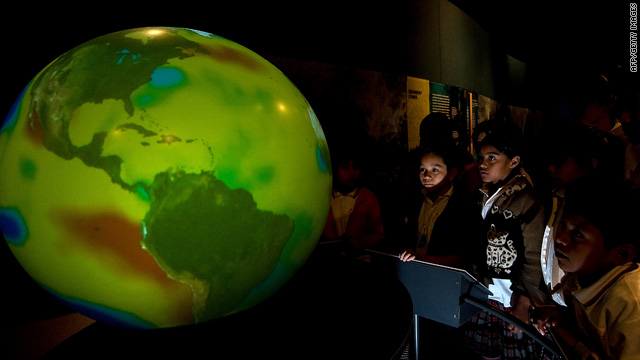 Singapore (CNN) -- Tim Flannery believes the future peace and stability of the world rides on action at next month's United Nations Climate Change Conference in Copenhagen.

"Really, Copenhagen is really a question between peace and prosperity versus war and chaos," Flannery, chairman of the Copenhagen Climate Council, told delegates at the Asia-Pacific Economic Cooperation CEO Summit on Saturday. "Food security, water security, mass migration and political instability" are at risk if the amount of greenhouse gases in the atmosphere isn't mitigated, he said.

Bjorn Lomborg, director of the similarly named Copenhagen Consensus Center, has a very different view -- not about the potential consequences of climate change, but about the "scary stories" approach of Flannery and others. He says the "end of days" approach is ineffective because the projections of potential damage so widely vary -- with ocean levels this century projected to rise anywhere from 18 centimeters to six meters.

"Panic is a pretty poor way to respond, which results in poor policies which don't get enacted," Lomborg told APEC delegates. "If you make the wrong policy decisions, you don't fix the problem and you waste much money."

Video: Hu: No to protectionism

Video: The state of global trade

Flannery, author of "The Weather Makers," said that climate models show that 80 percent chance in the next 100 years will be "moderate to severe," whereas there is a 10 percent chance on either end that "nothing will happen" or there will be "catastrophic consequences."

"To quote Rupert Murdoch, 'You've got to give the planet the benefit of the doubt'," Flannery said.

He argues that the opportunity for businesses and investors to get on the ground floor of new green technology is now.

"Some may want to wait for the discount factor (of investing in established technology) but I liken it to being told you have five years to live ... do you buy the medicine now, or do you wait four years for the price of the medicine to go down?" Flannery said.

"Business is the entity that is going to do much of the heavy lifting toward a clean energy environment," Flannery said.

Lomborg, author of the book "Cool It: The Skeptical Environmentalist's Guide to Global Warming," believes the cap-and-trade approach favored by Flannery and others is doomed to failure.

Under this plan, governments cap total emissions and require pricey permits and hefty fines for emissions. Industry finds ways to reduce emissions to decrease costs and with leftover polluting allocations sell to the highest bidder on the open market.

The European Union has been at the forefront of cap-and-trade policy.

Lomborg doesn't believe cap-and-trade will work because of the past failures of agreements in Rio de Janeiro in 1992 and in Kyoto in 1997, and predicts "accounting tricks" will ultimately hobble its effectiveness.

Lomborg said his group had 31 top environmental economists evaluate the most cost effective ways to reduce global warming. A stop-gap measure could be "geo-engineering" a solution by seeding marine clouds to reflect more light.

"That could avoid 100 years of warming for $9 billion, but that's a band-aid approach," he said.

Ultimately, both agree new clean energy technology is the only permanent solution to climate change. "We will never succeed in making dirty energy clean and inexpensive," Lomborg said.