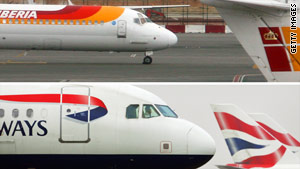 Both airlines are struggling in the face of what some say is the worst aviation recession on record.
STORY HIGHLIGHTS

(CNN) -- British Airways and Iberia announced late Thursday that they have agreed the basis for a proposed merger between the two airlines which is expected to be completed in late 2010.

The boards of BA and the Spanish carrier were holding separate meetings for much of the day as speculation mounted that they were close to sealing an agreement to create Europe's third-biggest airline.

In a statement, BA said the proposed merger would create an airline group with 419 aircraft which would fly to 205 destinations.

It added that the proposed merger "will result in the creation of a new holding company (TopCo) that will own both the existing airlines and whose shareholders will be the current British Airways and Iberia shareholders."

CNN's Richard Quest said that "despite numerous calls to bring talks to a swift conclusion, BA was adamant it would wait for the right deal.

He said: "The fact BA will gain the majority shareholding and Willie Walsh will become group CEO vindicates his policies."

He added that the creation of TopCo will allow both airlines to "retain their national ownership and therefore protect their own routes."

Antonio Vázquez, Chairman and CEO of Iberia, said: "It has been a long process where many people, both at British Airways and Iberia, have worked very hard to reach this agreement. But in the end it was worth it.

"This agreement is a giant step in the history of both Iberia and British Airways. We are laying the foundations of what will be one of the most important airlines in the world, a real global airline."

His counterpart Willie Walsh said: "The merger will create a strong European airline well able to compete in the 21st century.

"Both airlines will retain their brands and heritage while achieving significant synergies as a combined force."

BA last week reported a £292 million ($483 million) pre-tax loss for the six months to the end of September, its worst half-year deficit ever, while Iberia is expected to post a nine-month operating loss of more than €300 million ($447 million) when it reports its results on Friday.

Both airlines have embarked on painful cost-cutting measures, which has resulted in growing discontent and the threat of industrial action among employees.