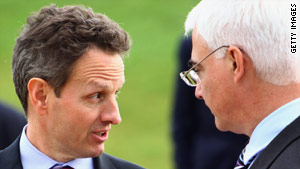 St. Andrews, Scotland (CNN) -- Key players in the Group of 20 refused to support a plan create an insurance fund to pay for bailouts if governments have to step in again to save giant businesses on the brink of collapse.

Finance ministers at the G-20 summit on Saturday discussed the idea of a tax on banks and other financial institutions to help fund future government emergency aid.

But U.S. Treasury Secretary Timothy Geithner indicated Washington would not back it, despite British Prime Minister Gordon Brown's apparent support.

"If we put the brakes on too quickly, we will weaken the economy and the financial system, unemployment will rise, more businesses will fail, budget deficits will rise and the ultimate cost of the crisis will be greater," he said at the summit in northeast Scotland.

But the Obama administration is not against getting the financial world to protect taxpayers in the future, he said.

The "basic principle" behind U.S. proposals is that "if the government has to step in in the future to put out a financial fire, that it does so in ways that doesn't put the burden on taxpayers," he said.

"The financial system bears the cost," he said. "Countries are looking at a range of different proposals," he said, adding that no one system "is going to fit the specific differences we face nationally."

The head of Argentina's central bank said the "transaction tax," also known as the "Tobin tax" after one of its proponents, was a "very nice idea" that would be hard to implement in practice.

"It is moving its way up the agenda, but when we get to the implementation... it is going to get into trouble," Martin Redrado said.

The International Monetary Fund has been asked to study how such a levy might work, and its effects. The Fund will report back in time for the G-20 Leaders summit next June.

British Finance Minister Alistair Darling told reporters the tax idea had a new lease on life, but refused to say if he supported the idea -- designed to make sure the financial sector contributes to the costs of any future bank rescue.

The session is the last time the G-20 plans to meet this year. It has the tricky task of balancing countries that still feel the wrath of recession, like the United Kingdom, and those whose economy is growing, such as Australia.

Saturday's meetings took place at the Fairmont Hotel in St. Andrews, near the famous golf course and overlooking the North Sea. Saturday's agenda focused on three main areas: structural reform of economies, stimulus and exit strategies for the current downturn and financing of climate change.

On the global economy, G-20 finance ministers said that financial conditions worldwide have improved but that there is still a long way to go.

They described the recovery as "uneven," and said it remains dependent on policy support. High unemployment is a major concern as well, the group said. The ministers have agreed to cooperate and consult about when and how they will withdraw stimulus support as growth picks up.

The IMF has been given an important new role in managing this coordination.

Brown, who hails from the surrounding county of Fife, called on members to reduce their sources of instability, such as volatile oil and commodity prices.

"But nobody doubts that we will have failed collectively if the post-crisis financial system that eventually emerges looks more or less like the one that brought the world economy to the brink of attack," Brown said.

"The reputation and legitimacy of the banking system has taken a severe beating" over the past two years, Brown said, leading the public to question whether a bank's risks and rewards are fair to taxpayers, shareholders and bank employees.

"This is a unique sector that, when it fails, it poses such a high cost to the wider economy and damage to society that government intervention becomes essential, so the taxpayer has had no real choice but to step in to keep the system afloat," Brown said.

"It cannot be acceptable to the general public that the benefits of success in the sector are reaped by the few but the costs of its failure are borne by all of us."

Those at the meeting need to discuss how to protect people from bank failure, Brown said. Financial institutions should order their businesses in a way that contains the cost of failure, he said.

Earlier Saturday, Darling focused on the "urgent problem" of how to pay for climate reform. He said it is important for countries, whether or not they disagree on the issue, to make at least some progress before the United Nations' climate change conference in Copenhagen, Denmark, next month.

"We won't have a final word today, because that's properly for the United Nations in Copenhagen, but I do think we need to make progress to show that we're willing to come to the table to play our part and to do whatever we can."