Welcome to the University of iTunes

LONDON, England (CNN) -- The wisdom of business professors, once only available to MBAs and business students, can now be accessed by anybody with an Internet connection. 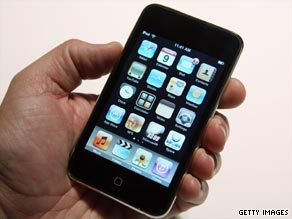 At HEC Paris, MBA students are given an iPod Touch so they can download podcasts of lectures.

Hundreds of universities, and a growing number of business schools, are making recordings of lectures, seminars and conferences available to the general public via Web sites such as iTunes and YouTube.

Leading business schools including University of Cambridge Judge Business School, Fuqua School of Business, and Yale School of Management make course content available for download through iTunes University (iTunes U), part of the of the iTunes online store.

That means those whose budget won't stretch to a two-year MBA can simulate the experience at home -- or at work, in the gym or anywhere else they choose. And even better for money-conscious learners, the iTunes U content can all be downloaded free of charge.

French business school HEC Paris is due to launch its iTunes U content in the next few months, but it has been running an ambitious podcast program since 2006.

Begun as an experiment in partnership with Apple, all new MBAs at HEC are provided with an iPod Touch. Around half of the MBA lectures are filmed using an automatic camera system and the footage is made available for students to download and view on their iPhones.

Vanessa Klein, HEC's project manager for iTunes U, told CNN that the iPod-enabled curriculum has proved a hit with students. As well watching lectures, she said the students' own presentations are recorded and made available for download so they can review their performance.

Klein says that by making lectures available via iTunes U, HEC wants to be at the forefront of providing content for the rest of the world, but she acknowledges that the technology is also a great way to promote the business school.

"It's a good marketing tool, not as publicity but to really show people what we are providing," she told CNN.

"You can watch a lecture, learn a lot and think 'I wish I could be there.' The idea is to show what you could learn if you were at this place."

YouTube EDU was launched in March this year and hosts the YouTube channels of hundreds of universities. Earlier this month it added content from 45 universities in Europe and Israel and now holds videos of lectures and discussions provided by business schools including INSEAD, ESCP Europe and University of California Haas School of Business.

Launched at the same time as YouTube EDU, Academic Earth hosts videos from U.S. universities including Harvard, Yale and Princeton, although the business content is provided almost exclusively by Stanford University.

Interested in the "Advanced Topics in Real Estate Finance?" You can download the complete lecture notes from Sloan's 2007 course on the subject at MIT's Open Course Ware site.

Other universities have their own Open Course Ware sites and the Open Course Ware Consortium has been set up as an agglomerator site, providing content from more over 200 higher education institutions.

This week's most popular business download on iTunes U is a University of Oxford lecture called "Entrepreneurship and the Ideal Business Plan."

It may not get as many downloads as Michael Jackson's posthumous single, but it should prove more useful when it comes to getting a business off the ground.