(CNN) -- Watching the premiere of "The Informant!" -- the Matt Damon movie about a high-level FBI mole at a large multinational company -- was the mole himself, Mark Whitacre. 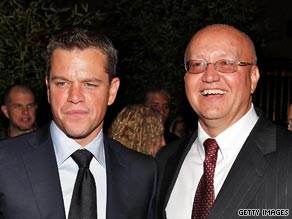 Mark Whitacre, right, at the premiere of 'The Informant' with Matt Damon.

Whitacre recognized real episodes in his life on the big screen, such as trying to fix a hidden tape player during a meeting and his delusional belief he would be made CEO of the company as a reward for his undercover work.

But what you won't see in the movie are the events of August 9, 1995, six weeks after an FBI raid blew the case into public attention. It was two days after ADM fired Whitacre and accused him of embezzling millions from the company. His FBI partners for the previous three years would no longer speak with him.

On that day, Whitacre sat alone in his car with its engine running inside a closed garage and slowly lost consciousness. He was hoping to end his life as surely as he had ended his career. A gardener found him unconscious.

Some scenes just can't be played for laughs. "There was nothing comical in the reality of the story," said Whitacre, who eventually spent nearly nine years in prison for his role in the price-fixing scheme and revelations he siphoned off $9 million from the company while he was working for the FBI.

For Whitacre, 'The Informant!' is a study in his own mental illness, as he was diagnosed with bipolar disorder after hospitalization for his suicide attempt. His meeting with Damon at the premiere was the first time the pair met. Damon told him he hoped they portrayed his illness in a sensitive way, Whitacre said.

The fix is in

For companies and regulators, the 1997 conviction of ADM was a landmark event, the first antitrust action in the United States since World War II and a case that has spurred price-fixing investigations around the world. "As a result of this case, the Department of Justice and the FBI started looking around to see if they could find any other cases like this," said Dean Paisley, a retired FBI agent who supervised the undercover ADM work.

"This used to be relatively unusual until the (ADM) case came to light," said John Connor, a Purdue University researcher on cartel activity, who was an expert witness in the government's case against ADM. "Back in 1993 you'd see maybe one or two global (price-fixing schemes) being discovered ... in the past three years or so, there are about 50 a year."

Price-fixing schemes -- where a cartel of manufacturers inflate prices against market demand -- cost consumers untold millions each year. In the ADM case, it was found that in the three-year period of investigation the company's cartel activity with manufacturers in Japan and Korea inflated prices by at least $200 million.

The ADM case resulted in a record $100 million fine in 1997 -- a figure long since dwarfed. Last month Japanese company Epson agreed to pay $26 million for its role in price-fixing LCD panels used in mobile phones in the U.S. Several other companies, including Sharp, LG and Hitachi, have already pleaded guilty in the case and paid fines of more than $600 million. Just last week, the Hungarian government fined Visa Europe, MasterCard and seven commercial banks a total of $10.4 million for price fixing bank fees (Visa and MasterCard are appealing that decision).

A sign of cartel activity is usually a sharp and uniform increase in price with a contraction in demand. "But, in fact, in the last 15 or 20 years (governments) have relied almost exclusively on whistle-blowers to make their cases," Connor said.

And as Whitacre showed, whistle blowers often don't have noble motives. "The movie should be taken very, very seriously," said Sam Antar, a CPA who turned government witness against his employer in the 1980's.

"In white-collar cases, the governments have to rely on informants ... in effect, relying on unsavory characters to make their case," said Antar, who now advises government agencies on white-collar crime.

"What happened in 'The Informant,' is he had an agenda to become head honcho of the company," Antar said. "The mistake the FBI agents made in the movie is they fell in love with their witness. It turned out there was a dark side they didn't know about."

Whitacre said he began stealing millions from the company while working for the FBI, in part, as a financial backstop in case things went wrong. "I had this sense of false entitlement, like they owe me this ... after all, the company was stealing hundreds of millions."

The stress of his double-life undoubtedly added to his mental woes, said Paisley, the original FBI supervisor in the case. He points out that undercover FBI agents receive surveillance training and are pulled for psychological evaluation once a year -- Whitacre received none of that.

"There were no provisions for similar checks and balances with Whitacre," Paisley said. "He had no ideas what he was getting into when he agreed to cooperate ... we had no idea it would last three years."

Although Whitacre has served his time, Paisley and other agents involved in his case are seeking a presidential pardon. "He really screwed up by stealing," Paisley said. "Be that as it may, how many hundreds of millions would have been stolen if (ADM) wasn't stopped by Mark Whitacre? He is a national hero, in my eyes."