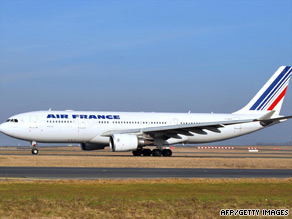 The loss of the Air France Airbus A330 with the loss of 228 lives has cast a pall in Paris.

One of the commercial aerospace industry's most prestigious events, the biennial show is celebrating its 100th anniversary with the industry facing grim economic numbers and the aftermath of the transatlantic crash of a Paris-bound Airbus A330 that killed 228 passengers and crew on May 31.

The crash was also the focus of attention Wednesday as France's chief crash investigator said it was "virtually certain" that authorities would be unable to recover all parts of plane.

The crash forced Airbus company officials to spend much of the Paris Air Show talking to reporters about the accident investigation rather than focus on sales, the primary purpose of the event.

"I think ultimately, even without the black boxes, we will get to the bottom of (the cause of the crash)," John Leahy, chief commercial officer for Airbus, told CNN.

This year's air show is already winding down, after two days of scant orders for Airbus and none for Boeing. The defense companies in Paris are now looking to grow their business in the Middle East and Asia as the world's biggest player -- the United States -- is decreasing its defense budget.

The air show comes at a time when the commercial airline industry is facing its worst crisis in years.

"The airline industry, collectively, hasn't made money in a long time," said Steve Lott of the International Air Transportation Association. "After September 11, the industry faced revenue drops of 7 percent. This year, we are facing a revenue drop of 15 percent."

As a result, airlines are parking planes, which mean fewer flights, less fuel costs and fewer employees to pay -- as well as higher fees for customers and more crowded flights.

Also at the air show Boeing -- which along with Airbus dominates the aerospace manufacturing industry -- faced angry words from one of its customers over the Boeing 787. The 787 has been delayed for two years and is expected to make its maiden flight later this month.

"Unfortunately, (Boeing is) not being run by commercial people, but it's being run by bean counters and lawyers," Akbar Al Baker, CEO of Qatar Airlines, told CNN. The airline, which previously was an exclusive Airbus client, is awaiting 30 of the new Boeing jets. "Boeing is not the company I thought it was when I ordered my airplanes.

"We are not looking for any handouts from Boeing, but looking to be treated fairly with their 787 program," he said.

In response to Baker's statement, Boeing said it is "making good progress on 787 ... we are working closely with each of our customers and are confident of the value the 787 will bring to airlines and to passengers."

In a separate interview at the air show, Scott Carson, the chief executive of Boeing's commercial division, said the technical issues with the 787 have been resolved. Only 60 orders of 3700 aircraft have been cancelled as a result of the financial crisis, Carson added.

"We watch all the economic indicators. As we've watched both the traffic decline in passengers and the ton miles decline in freight over the last five or six months it appears to us we are at the bottom or perhaps bouncing along the bottom," Carson said. "And that creates a sense of optimism for what the recovery will look like."

All About Boeing Company • Airbus A330 • Paris