HONG KONG, China (CNN) -- As General Motors heads toward insolvency, the company that was once the biggest on the planet is still riding high in the world's most populous country. 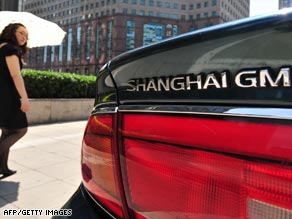 China is one bright spot in GM's dismal fortunes, but U.S. consumer activists have raised concerns.

As the storied American company prepares to financially dismantle its operations between good and poor performing assets, GM China is becoming the crown jewel in the company's operations.

"If there's a good GM and a bad GM, China is definitely going to be in the good GM side," said Michael Dunne, an auto analyst and managing director of J.D. Power and Associates China.

But the company's build-up in China is raising concern for U.S. consumer advocates and members of the U.S. Congress. Of particular concern are plans to build cars for the U.S. market in China after thousands of GM workers were laid off at U.S. plants.

"Do we really want the United States of America to export its auto industry paid for by the taxpayer, and un-employ workers to a dictatorship to a country like China?" said consumer advocate Ralph Nader. "Where's our self-respect as a nation?"

Adds U.S. Sen. Sherrod Brown, a Democrat from Ohio: "That cannot be a part of their restructuring of this company. Their business plan cannot include more outsourcing of jobs while taking taxpayer money."

Industry analysts say the decision is a simple matter of dollars and cents: GM is now the third-biggest car manufacturer in China, which has recently overtaken the U.S. as the world's largest car market.

"Our business is run as separate joint-ventures here in China in partnership with SAIC ... so we're profitable, we fund our own investment and we would be largely independent of any action that took place in the US," said Kevin Wale, president and managing director of GM China.

"It seems as though they have enough going on out here that they will remain insulated from the bankruptcy back home," adds Dunne. "I see GM weathering the storm in Asia and holding on to what they've accomplished here and being able to ride it out here."

CNN's Andrew Stevens and Jim Acosta contributed to this report