(CNN) -- When the rest of the publishing world herded to a free model of online news in the 1990s, Gordon Crovitz didn't follow suit. As a former publisher of the Wall Street Journal and journalist with Dow Jones, he was part of the team that decided news on the Web should be paid for. 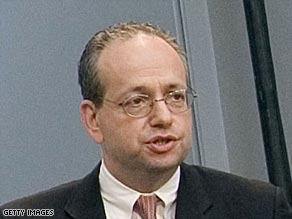 Gordon Crovitz is trying to bring the WSJ pay model to the rest of the publishing industry.

Now Crovitz, who left as publisher of the Journal when it was purchased by News Corp. in 2007, is trying to help recreate the WSJ success of the paid model for the rest of the publishing world. Together with Steve Brill, founder of Court TV and a number of legal publication, and private equity fund managing partner Leo Hindrey Jr., Crovitz is hoping their company Journalism Online will reshape the Internet landscape and help staunch the revenue bleed from mainstream media.

Named to the 2008 "Silicon Alley 100" last year by Business Insider, he is an adviser to several technology media companies and writes the "Information Age" column for The Wall Street Journal. The following is a conversation Crovitz had with CNN.com.

CNN: In the early days of e-commerce, it was said only two things were making money on the Internet: pornography and The Wall Street Journal. Why did the Journal decide to buck the trend in the rest of the media world in the 1990s and pay for access?

Crovitz: At the very beginning, the idea behind the launch of the online Journal was to charge for it. I think the feeling of the Journal managers at the time was, it's very hard to charge access in one medium like print, and not charge for another medium like online.

We also found a reasonable number of people were willing to pay a reasonable amount for access. I believe (wsj.com) has just over 1 million subscribers and about 20 million unique visitors a month.

CNN: Journalism Online will try to bring the WSJ.com model to the rest of the industry. But will people pay for content that was once free?

Crovitz: We are not suggesting that all content be free one day and all content be paid the next -- that won't work. I think it's highly likely that in the coming months that the reader experience on the Web will include a significant amount that is still free.

We're suggesting publishers look at their unique content and decide the kind readers are likely to pay for access. A lot of the content remain free, but not all of it. News publishers will look to find areas of access -- content or otherwise -- to encourage a percentage, maybe 10 percent or so, who will become subscribers.

CNN: Isn't that exactly what the New York Times tried with Times Select, when they tried unsuccessfully to get readers to pay for opinion pieces and columnists?

Crovitz: I'd rather not comment on a specific publication. One thing I will point out is that at the Wall Street Journal by 2000 nearly all content was paid with one exception -- Opinion Journal (featuring op-ed commentaries). It's a free site, and remains a free site.

But there are dozens of examples of successful cases where people are very happy to pay for access. For those people who say it can't be done, there are examples of companies doing it every day.WSJ.com and the Financial Times have long done it. ESPN.com and Consumer Reports has successful premium content models.

Publishers just need to decide what part of their access is worth paying for. Sometimes it may be how quickly access can be. For example, Barrons.com a significant amount of content is behind a paid wall from Saturday to the end of trading on Monday, then much of it available for free.

CNN: How will Journalism Online work?

Crovitz: One of our offerings is a new e-commerce platform that will be integrated into a Web site, to make it as easy as possible to got to one place and sign up for what they want -- an all-you-can-read bundle with a single price for multiple brands, or micropayments for individual articles.

We wouldn't be replacing the existing (publication) Web site ... but our e-commerce platform will be on the publishers Web site.

We would also represent our affiliates in contracts with new devices like Kindle. At the moment, the lion's share of the payment model (for content) goes to the device maker. We think the logical place for that to reside is with the news publishers.

CNN: You plan to launch next fall -- who is signed up so far?

Crovitz: I won't mention any companies but it's fair to say we've spoken to the largest news publishers in the world and every one of them has expressed an interest in moving toward a paid model.

The current recession has reminded publishers that advertising is a very cyclical business. That's proven today not only for traditional media companies, but even online-only organizations. There is pressure on online advertising to make a go of it, which really hasn't happened yet.

For many news publishers, a high percentage of readers come from outside the country .... British Web sites get a lot of traffic from the U.S., and so forth. Typically, capturing that audience been a very hard sell to advertisers, because most advertisers are not organized that way. (Micropayments for news articles) are a way to generate revenue from an international audience.

CNN: Why are you rolling Journalism Online out now?

This seems the best opportunity for news publishers to find new revenue streams to support large news organizations. Without them, you'll continue to see what you've been seeing in newsrooms around the world -- fewer journalists and less journalism produced.