(CNN) -- Asia's economic growth will tumble to the slowest pace since the 1997-1998 Asian financial crisis, the Asian Development Bank (ADB) said in a report released Tuesday. 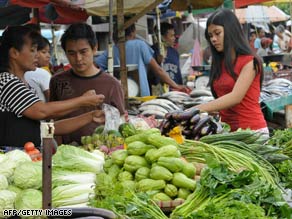 Customers buy vegetables at a market in Quezon City in suburban Manila, Philippines, on September 16.

"The short term outlook for the region is bleak as the full impact of the severe recession in industrialized economies is transmitted to emerging markets," said Jong-Wha Lee, acting chief economist for the ADB.

The Asian Development Outlook 2009 forecasts that economic growth in developing Asia will slip to 3.4 percent in 2009, down from 6.3 percent last year and 9.5 percent in 2007. Growth could improve to 6 percent in 2010, if the global economy experiences a mild recovery next year, the report says.

"The concern for the region, and especially for the region's poor, is that it is not yet clear that the [United States], European Union and Japan will recover as soon as next year," Lee said.

The slowdown should prompt Asian countries to expand their economic base and not be as dependent on exports, according to the report.

Despite the downturn, the report says Asia is in a much better position to cope with the current crisis than it was in the late 1990s.

"Large foreign currency reserves and steadily declining inflation rates will provide policymakers with the necessary tools to nurse their economies through the hard times ahead," the report said.

A number of Asian governments, including China, Japan and South Korea, have already responded quickly to the global financial crisis with stimulus packages and changes in monetary policy, helping to stem some of the downturn.