HORSHAM, England (CNN) -- Financial experts from 20 nations urged more regulation and oversight of fiscal institutions to help prevent another monetary crisis, as they laid the groundwork Saturday for next month's G-20 Summit of world leaders. 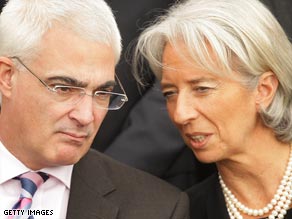 "This is a global crisis, and it requires a coordinated, global response," U.S. Treasury Secretary Timothy Geithner said at a news conference. "We have a broad base of consensus to act aggressively to restore growth."

"You are seeing the world move together at a speed and on a scale without precedent in modern times. All the major economies are putting in place substantial fiscal packages," he said. "The stronger the response, the quicker recovery will come."

The G-20 financiers recommended substantial increases in support for the International Monetary Fund and Asian Development Bank. In a communiqué, they said an expansion of the IMF's membership should be considered.

The IMF monitors global financial developments, loans money to developing countries, provides technical assistance and does economic research. The institution also plays a key role in the fight against money-laundering and terrorism.

Geithner said the United States will soon release a framework for regulatory reforms that is guided by several principles, including stronger oversight of financial institutions and stricter standards for stability and disclosure.

Action must be taken, the financiers said, to ensure that all major "financial institutions, markets and instruments are subject to an appropriate degree of regulation and oversight, and that hedge funds or their managers are registered and disclose appropriate information to assess the risks they pose.

The recommendations also will be considered at next week's session of the European Council.

"Regulators in one country must cooperate more closely in another country to create a global network of supervision," British Prime Minister Gordon Brown said at a news conference.

"We have to address the fact that a bad bank in one country can undermine good banks in every country, and that multibillion-dollar markets still exist outside the supervisory net," Brown said.

"We call on all countries to adopt international standards and sign bilateral agreements to exchange tax information with other countries."

The G-20 summit next month was initially going to focus on financial markets and regulation, but the deepening crisis around the world necessitated the need for a broader economic package that includes everything from stimulus packages to uneven interest rates, said Mark Malloch-Brown, the British prime minister's envoy to the summit.