PARIS, France (CNN) -- A day of strikes dubbed "Black Thursday" in France looked more like "Gray Thursday," with officials reporting a mixed impact across the country. 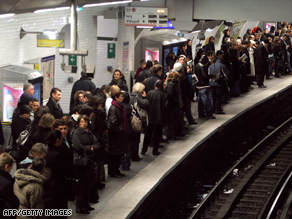 Commuters wait for a train at a metro station in central Paris on "Black Thursday."

Union officials said 2.5 million people demonstrated across the country, while the Ministry of the Interior put the number at one million. No arrests or violence were reported, Paris police said.

Suburban trains lines into and around Paris were badly hit. At best, only one in five was operating Thursday, operator RER said.

Public transportation workers and other civil servants planned the 36-hour strike over a range of concerns spurred by the world economic crisis.

Specifically, workers are anxious about a range of problems, including low salaries, poor buying power and job insecurity. Their collective strike action challenges the way the French government has handled the economic crisis.

Unions complain that the government has spent billions to bail out banks and the auto industry while allowing little of that money to filter down to workers.

Students, teachers and government workers were striking alongside transportation employees.

Under a law introduced last year, schools are required to provide a "minimum service" to ensure that children with nowhere else to go during a strike may still be able to go to school. The law doesn't require that classes take place -- only that caretakers are provided.

Paris municipal authorities said it was difficult for them to ensure a minimum service Thursday because they were not given enough notice for the strike.

City officials said a total of 90,000 children in the capital would be affected in some way.

The national state-owned railway SNCF said traffic was normal on trains from Paris to other European capitals such as London and Zurich. It said the national high-speed TGV trains were running normally in eastern France, with traffic at 50 percent to 80 percent of normal levels in other parts of the country.

-- CNN's Jim Bittermann and Sujatha Samy contributed to this report.

All About France • Paris • Jobs and Labor