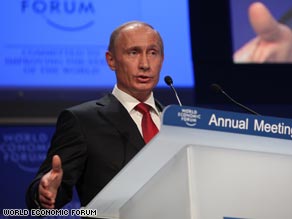 The global economic meltdown dominated the agenda on the opening day of the annual meeting of powerbrokers and opinion formers, with Putin telling delegates that the crisis constituted a "perfect storm."

While economists and analysts could -- and should -- have predicted the crisis, Putin said, instead it had "come unexpectedly, just as winter comes unexpectedly to Russia every year."

"Just a year ago, American delegates speaking from this rostrum emphasized the U.S. economy's fundamental stability and its cloudless prospects. Today, investment banks, the pride of Wall Street, have virtually ceased to exist," Putin commented.

"We expect all our partners in Europe, Asia and America, including the new U.S. administration, to show interest in further constructive cooperation in dealing with all these issues," Putin said.

He said it was time to "do away with virtual money" and establish an "economy of real values" grounded in a "just and efficient global economic architecture."

"Political leaders must be forward-looking," Wen told delegates. "They should be responsible to the entire international community as well as to their own countries and people."

Wen admitted that the economic crisis had severely affected China's businesses, notably because of falling demand for Chinese exports. But he said the fundamentals of China's economy remained in "good shape," predicting 8 percent growth in 2009, following 9 percent growth in the previous 12 months.

He called for a raft of measures to be implemented to address the root causes of the crisis and create a "new international financial order."

They included the reform of supra-national financial institutions to grant more power to developing nations and the establishment of a multilateral trading regime.

"In tackling the crisis, practical cooperation is the effective way," Wen said. "The financial crisis is a test of the readiness of the international community to enhance cooperation and a test of our wisdom."

Earlier, several dozen pro-Tibetan demonstrators gathered peacefully in Davos about a kilometer from the conference venue to protest over Wen's presence at the annual meeting of powerbrokers and opinion formers.

More than 2,500 participants from 96 countries are attending this year's meeting, including 40 heads of state or government.