Hurricane Omar picks up strength as it approaches islands

MIAMI, Florida (CNN) -- Hurricane Omar became a major Category 3 storm Wednesday night as it barreled toward the Virgin and Leeward Islands in the West Indies, the National Hurricane Center said. 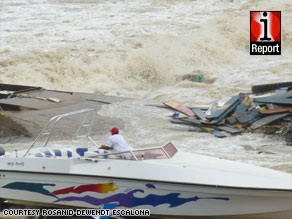 A man watches waves crash into the shore Tuesday at Club Nautico in Falcon state, Venezuela.

Omar is expected to continue gathering strength as it passes east of the Virgin Islands in the next few hours and makes its way to the northern Leeward Islands Thursday morning, the hurricane center said.

A hurricane warning --meaning winds of 74 mph and higher are expected within a day -- is in effect for the U.S. Virgin Islands, the islands of Vieques, Culebra, St. Martin, Saba, St. Eustatius, St. Barthelemy, the British Virgin Islands and Anguilla.

See where Omar is headed »

Puerto Rico is under a tropical storm warning and a hurricane watch, as are St. Kitts and Nevis, the hurricane center said.

As Omar approached, Hovensa, a 500,000-barrel-a-day oil refinery on St. Croix, began shutting down all processing and auxiliary equipment "except those necessary to maintain power supply in the complex," refinery spokesman Alex Moorhead said in a statement.

The move was to ensure the safety of employees and the operation of the refinery, which is jointly owned by Hess Corp. and Venezuela's state oil company.

The U.S. Coast Guard closed the Christiansted Harbor, where the refinery is located, on Tuesday, and it will remain closed until the order is lifted, Moorhead said.

"Once Hurricane Omar has passed, we will conduct an inspection of our facilities as soon as it is safe to do so. If no damage is found that would impact safe operation of the refinery, the start-up of processing units will begin in sequential order," Moorhead said.

Puerto Rico and some portions of the northern Leeward Islands, which includes the Virgin Islands, could get up to 20 inches of rain, according to the forecast.

"These rains could produce life-threatening flash floods and mudslides," the hurricane center warned.

Also, the storm could produce large swells affecting the western and southern coasts of the Lesser Antilles, the Caribbean islands that stretch from the Virgin Islands southward to the islands off Venezuela's coast.

The swells could cause beach erosion and damage coastal structures, the hurricane center said.

The storm's forecast track shows it heading into the open waters of the Atlantic Ocean after crossing over the Virgin Islands and sweeping past Puerto Rico, but hurricane tracks are subject to variation, and such long-range predictions can change.

Omar formed Tuesday in the eastern Caribbean. It is the 15th named storm of the Atlantic hurricane season, which began June 1 and ends November 30.