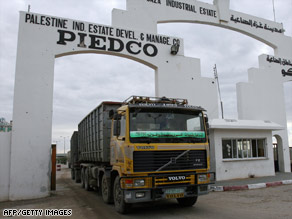 A truck carrying grain enters Gaza from Israel on Friday at the Karni crossing point, one of three Israel reopened.

A third child was in critical condition. The children, all girls, were cousins -- the two who died were 7 and 12, and the injured child is 5, Hamas security and Palestinian medical sources said.

The rocket struck a house north of Gaza City.

In a separate development, the Israeli military said it allowed a Palestinian who was badly wounded by rocket fire Wednesday to enter Israel for treatment. The Palestinian entered Israel through the Erez Crossing between northern Gaza and Israel.

Israel closed the crossing for all but humanitarian reasons because of rocket attacks from Gaza into Israel by Palestinian militants. But it opened three other crossings Friday, allowing fuel and commodities into the Palestinian territory for the first time in more than a week.

About 80 trucks filled with commodities were expected to cross into Gaza. Among the goods were 400,000 liters of fuel and 120 tons of cooking gas.

The decision to open the crossings at Kerem Shalom, Karni and Nahal Oz came after requests from international aid groups and Egypt, said Peter Lerner, a spokesman for the Coordinator of Government Activities in the Territories. In addition, he said, Israel has no desire to hurt the civilian population in Gaza.

Lerner said whether to keep the crossings open would be a daily decision.

United Nations assistance programs in Gaza have run out of flour and several essential pharmaceuticals, the U.N. Office for the Coordination of Humanitarian Affairs said.

A tenuous six-month truce between the Hamas government in Gaza and Israel expired a week ago. Under the Egyptian-brokered deal, Hamas agreed to end militant attacks on Israel from Gaza, and Israel agreed to halt raids inside the territory and ease its blockade on humanitarian goods.

In reality, the truce started breaking down two months ago. Rocket attacks by militants became more frequent, and Israel resumed airstrikes inside Gaza.

Since then, dozens of rockets have been fired by Palestinian militants into Israel. Israel Defense Forces said about nine rockets have been launched from Gaza since midnight, pushing the three-day total to more than 110. There are no reports of casualties in Israel.

The crossings opened a day after Israeli Foreign Minister Tzipi Livni and Egyptian President Hosni Mubarak met in Cairo and Egypt expressed concern about the deteriorating humanitarian situation in Gaza.

Livni criticized Hamas after her meeting with Mubarak.

"Hamas needs to understand that Israel's basic desire to live in a tranquil region doesn't mean that Israel is willing to accept ongoing shooting at its population," she said, according to the Israeli Foreign Ministry.

"Enough is enough. We cannot accept this situation, and the situation will change."

Israeli Prime Minister Ehud Olmert has threatened to respond to the escalating violence. He warned Hamas again Thursday in an interview on the Al Arabiya television network and seemed to suggest that time was running out.

"We do not want to fight the Palestinian people, but we will not allow Hamas to strike our children," Olmert said.

"I did not come here to declare war," he continued. "But Hamas must be stopped -- and so it will be.

"I will not hesitate to use Israel's strength to strike at Hamas and Islamic Jihad. How? I do not wish to go into details here."

All About Israel • Hamas • Gaza • Egypt