BAGHDAD, Iraq (CNN) -- The Iraqi journalist who hurled his shoes at President George W. Bush has won some hearts in neighboring Iran, where one cleric dubbed the act "the shoe intifada (rebellion)." 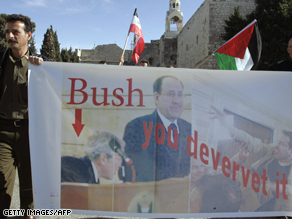 "The shoe intifada in Iraq should not be overlooked easily," he said. "Well done to the Iraqi journalist for throwing the shoes at the U.S. president."

Speaking to worshipers at Tehran University, Jannati labeled the shoes "more valuable than crowns, medals and signs" and believes they should be place in an Iraqi museum.

The government of Iran and the United States have been bitter antagonists for decades.

Iran has opposed the U.S. presence and policies in Iraq and the United States has accused Iran of backing militants in Iraq.

Jannati said the U.S. was trapped in a quagmire in Iraq and didn't know what to do about it.

In the Indian capital of New Delhi, Iran's deputy foreign minister told reporters that the incident points to frustration in the elite levels of society with Bush's policies.

Neither of al-Zaidi's shoes hit Bush, and the journalist was knocked to the ground, hustled out of the room and arrested by security officials.

As he was pushed to the floor, the reporter shouted out that his shoe-throwing -- a traditional insult in Arab culture -- was a "farewell kiss" to a "dog" who launched the 2003 invasion of Iraq.

Al-Zaidi faces time in an Iraqi prison. The Iraqi government on Thursday said he had written a letter to al-Maliki asking for leniency and calling his actions "ugly."