TEHRAN, Iran (CNN) -- Several Iranians working directly for the country's nuclear research program were among those arrested recently for funneling information about the program to foreign nations, according to an Iranian media report. 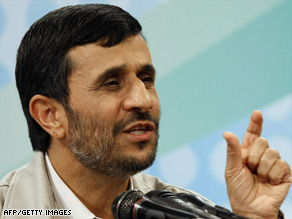 The Tabnak report which was released on Tuesday did not say which countries were connected to the alleged spying ring or how many Iranians were arrested in the past few months.

Tabnak is a semi-official Iranian news agency that is linked to a former commander of Iran's Islamic Revolutionary Guards Corps.

The report said the arrests were made after media reports which claimed the United States and other Western intelligence agencies were trying to spy on Iran's nuclear program.

Iran maintains its nuclear program is for energy purposes only, despite accusations from the U.S. and other Western nations that Tehran is trying to develop nuclear weapons.

The network included members who had allegedly been trained in Israeli cities to carry out bombing attacks and assassination plots in Iran, Tehran's prosecutor, Saeed Mortazavi, told Fars.

In November, Iran executed Ali Ashtari, 45, who was convicted by Tehran's Revolutionary Court in June of spying for the Mossad in exchange for money, according to Iranian media reports.

According to Ashtari's "confession," published by Fars, he was a salesman who obtained high-end but security-compromised pieces of electronic equipment from the Mossad and sold them to military and defense centers in Iran. Iran and Israel have been engaged in an escalating war of words.

Iran accuses Israel of trying to destabilize the republic. Israel has not ruled out military action to halt Iran's nuclear aspirations.

Several other Iranians are currently in custody, awaiting trial on charges of spying for foreign countries and planning terrorist activities inside Iran.

All About Iran • Israel • Nuclear Weapons