HEBRON, West Bank (CNN) -- Jewish settlers are on a "terror" rampage in the West Bank city of Hebron, angry over the Israeli military's seizure of a disputed home, the city's mayor said Thursday. 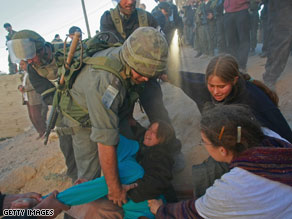 Israeli police struggle to remove Jewish settlers from a disputed house in Hebron on Thursday.

"What's happening in Hebron is terror by the settlers," the mayor, Khaled Osaily, told CNN. "They are attacking houses, setting fire to property and injuring people."

Some of the settlers opened fire on Palestinians, critically injuring one, Palestinian sources told CNN. Five other Palestinians have been wounded in the rioting, the sources said.

The latest round of violence comes hours after Israeli police and military forcibly removed a group of settlers from a disputed home in Hebron. The settlers inside the residence had ignored court orders to vacate the house, which a Palestinian man claims belongs to him. The situation has led to recent clashes between Jewish settlers and Palestinian residents.

Osaily called on the international community to pressure Israel to remove all settlers from Hebron, one of the most contested cities in the West Bank, with a Palestinian section and a Jewish settler enclave. It is home to about 160,000 Palestinians and 500 Israelis.

"We warned the Israelis about this," the mayor said. "They didn't do enough to stop the settlers from their aggression."

Shortly after seizing control of the disputed home, the Israeli military declared the southern part of the West Bank, including the entire city of Hebron, a closed military zone.

Israeli media reported that the settlers are vandalizing Palestinian residences in the Hebron area, including setting fire to some homes. Israeli daily Haaretz reported that police used stun grenades and tear gas to subdue the rioting settlers.

"There have been sporadic incidents," he said. "We have stepped up police patrols in the West Bank to increase security."

A line of Israeli forces stood outside the disputed home on Thursday, as specially trained Israeli police pulled the settlers out of the home, according to Israeli military spokesman Maj. Avital Leibovitch. A banner castigating Israeli Defense Minister Ehud Barak and the president of Israel's Supreme Court, Dorit Beinisch, hung above the home's entrance.

Some of the settlers walked out unassisted, while others were physically escorted by the security forces. One settler, who was on the ground in tears, was carried away.

The entire operation took just over an hour, Leibovitch said.

"The events today in Hebron demonstrate clearly that in Israel the rule of law will prevail and not the vigilante extremist," said Mark Regev, a spokesman for outgoing Israeli Prime Minister Ehud Olmert.

Ambulance services reported 20 people -- settlers and Israeli security forces -- were injured in the struggle, none seriously.

Earlier this week, the Israeli army established a closed military zone around the disputed house.

Israeli security forces moved in to remove the settlers a short time after Barak and the Settler Council failed to agree to resolve the situation peacefully.

Barak told the council leaders that "all citizens must accept the authority of the state."

The settler leaders agreed but called on Barak not to forcibly remove the settlers from the house, council spokesman Yishai Hollander told CNN.

The council leaders offered to Barak several non-violent solutions to end the confrontation. Hollander noted that there is a small group of settler extremists who do not abide by Israeli law nor the council's demands.

Barak vowed that Israel "will not allow extremist elements to undermine the authority of the state and its foundation."

"The people who are residing in the disputed house must vacate the house and follow the instructions by the state organizations and the courts," Barak told the council, according to his spokesman. "Only after the house is vacated will it be possible to clarify the disagreements."

Israeli settlers moved into the so-called "house of contention" last year, claiming they bought it from the Palestinian man. That man, however, says no deal was ever made.

A court ruled two weeks ago that the settlers living in the house must evacuate. It said they would be evicted within 30 days if they did not leave voluntarily, but the settlers ignored the court's orders.

Violence flared Monday over rumors that the contested house would be evacuated. Eleven people were wounded. Settlers and Palestinians threw stones at each other and settlers rioted elsewhere in the West Bank.

Hebron also is the location of the Cave of the Patriarch, a religious site holy to Jews, Christians and Muslims, and has been the site of high-profile violence between Palestinians and Israelis.

All About Hebron • West Bank