BAGHDAD, Iraq (CNN) -- Kept in a derelict warehouse at Baghdad's airport for months, sleeping four to a bed with poor food and no money, hundreds of would-be contract workers are stranded, claiming they were duped by unscrupulous recruiting agents into coming to Iraq for nonexistent jobs. 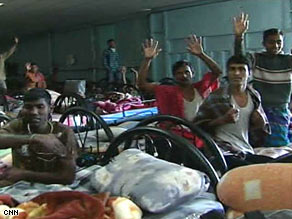 Men staying in an airport warehouse say they paid recruiters to take them to Iraq, believing they'd get jobs.

The recruiters told the men -- from India, Nepal, Bangladesh, Sri Lanka and Uganda -- that jobs were waiting for them with American defense contractor KBR, through a Kuwaiti company called Najlaa Catering Services. The recruiting agents charged them between $3,000 and $5,000 to make the trip to Iraq; many sold their farms or other valuables to raise the money.

But when they arrived in Baghdad, they said, Najlaa housed about 1,000 of them -- 600 in the one-room warehouse -- in the compound within the airport, surrounded by private security guards. Showers are there, but are useless because the taps are nonfunctional. Many have questions about their visas and status in Iraq. Legally unable to stay, they lack the money to return home.

Asked if their governments were helping them, the men said, "Nothing, nothing." They said that when they protested, their guards fired guns upward to silence them.

Watch footage of the men, warehouse »

Najlaa's officials in Iraq refused comment to CNN. The company's Kuwaiti office said the situation was "under control" and being dealt with.

Some Ugandan men said the Iraqi police handcuffed and beat them. "They say, 'If you are here for the U.S., we're going to show you the difference between the U.S. government and the Iraqi government. Let's see if the U.S. is going to help you,' " one man said. Iraqi police would not answer questions regarding those allegations.

As the men spoke to CNN on camera, an official in charge of them threatened to lock them out of the compound unless they returned inside within two minutes.

KBR was not involved in recruiting the men. The company told CNN it does not condone unethical behavior, saying its contractors abide by its code of conduct, including training in human trafficking. The company said when it becomes aware of possible trafficking it works "to remediate the problem and report the matter to proper authorities. KBR then works with authorities to rectify the matter."

Meanwhile, men at a separate makeshift camp nearby said they were duped by different recruiters. They live off food donated by Iraqi workers, and say the men who brought them to Iraq have disappeared.

The men in the makeshift camp said their immigration status is in limbo. Their passports have been taken, or pages with visas have been torn out.

Help may be on the way. The men said United Nations workers had visited them. The world organization told CNN it is aware of the situation and is figuring out how to assist the men.

The U.S. military told CNN it takes human rights abuses seriously and is looking into the matter. The Iraqi government has also confiscated the passport of a Najlaa official until a solution is found.

But for the stranded men, help can't come soon enough.

CNN's Thomas Evans and Jomana Karadsheh contributed to this report.