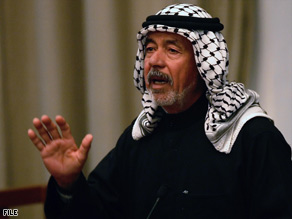 Ali Hassan al-Majeed was sentenced this time for his role in suppressing a 1991 Shiite Muslim uprising against his cousin, former dictator Saddam Hussein.

Al-Majeed already faces the gallows for the Anfal campaign in northern Iraq, which killed at least 100,000 Iraqi Kurds.

The Anfal campaign included a 1988 attack with poisonous gas and chemical agents that killed 5,000 people in the village of Halabja, earning al-Majeed his nickname.

His original death sentence for the Anfal campaign came in June 2007. He and other former members of Hussein's regime are in U.S. custody.

The latest sentence was handed down for al-Majeed's role in the slaughter of thousands of Shiite Muslims during the revolt in southern Iraq that followed the 1991 Persian Gulf War.

Al-Majeed was sentenced along with 14 other former Iraqi officials for their roles in the 1991 offensive.

Three were acquitted. The rest were convicted and immediately sentenced.

Sultan Hashem Ahmed is also on death row for his role as military commander of the Anfal campaign. He was given an additional 15-year prison term on Tuesday.