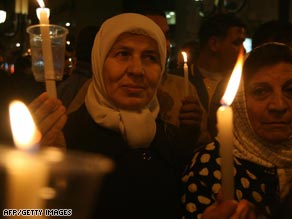 Palestinian women hold candles during a vigil protesting the Israeli blockade of the Gaza Strip.

Israel's Foreign Ministry said the ship was stopped and ordered to turn back because it was not authorized to dock in the Palestinian territory of Gaza which is under an Israeli blockade.

After receiving the message by radio contact, the Libyan ship turned back, a ministry spokesman said.

Gaza lawmaker Jamal Khoudary said the ship returned to the Egyptian port town of Al-Arish near the Gaza border.

"This ship was carrying food and medicine and was coming to assist the Palestinian people in Gaza, where they live under siege," Khoudary said.

Israel maintains that rocket attacks and security threats from militant groups in Gaza forced it to close its border crossings with Gaza. The blockade also applies to ships coming into Gaza. Israel controls the waters off the coast of the Palestinian territory.

Human rights groups have expressed concern about the Israeli blockade on Gaza, which has restricted the delivery of emergency aid and fuel supplies.

The U.N. has launched a humanitarian appeal for Gaza because of what the regional U.N. humanitarian coordinator Maxwell Gaylard called "an assault on human dignity."