(CNN) -- The roadside bomb that smashed into Army Sgt. Brian Saaristo's Humvee in northern Iraq two years ago ripped off both legs below the knee. 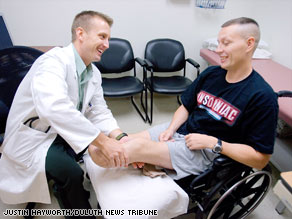 Retired Army Sgt. Brian Saaristo, who lost both legs to a roadside bomb, meets with a doctor in Minnesota.

Now he's 45, living in retirement in Minnesota and confronting the rest of his life without the use of his legs. Yet he worries mainly about the thousands of younger U.S. service members who also have been maimed by makeshift bombs in Iraq and Afghanistan.

"Younger ones are taking it harder," Saaristo said. "They feel they don't have the rest of their lives."

Roadside bombs and other homemade explosives have been a deadly staple of the wars in Iraq and Afghanistan, killing or wounding thousands of U.S. service members and civilians.

Such improvised explosives devices -- "IEDs" to the military -- are the "weapon of choice" for insurgents, U.S. officials say. They're mostly cheap, easy to build and triggered by simple remote control.

Protecting U.S. troops from such bombs is a top priority at the Pentagon. It has spent $14 billion in the past four years to fight homemade bombs. It even created an agency for that purpose -- the Joint Improvised Explosive Device Defeat Organization.

That agency has had some success, a new report says, but insurgents continue to kill and maim U.S. service members with homemade bombs, in part because the bombs fulfill their purpose and it is easy to acquire the materials used to construct them.

The report came from a subcommittee of the House Armed Services Committee. It followed two years of hearings and study.

The number of IED attacks has dropped in Iraq and gone up in Afghanistan, said Irene Smith, a spokeswoman for the IED organization. Yet there are more than 1,400 such attacks a month in Iraq and Afghanistan and an additional 350 elsewhere, a sign that insurgents continue to rely on them.

"We are in a long war, a persistent conflict with a group of insurgents who want to wear down our will so we quit -- the purpose of an IED," she said. "The enemy recognizes IEDs as the weapon of choice."

The IED agency has developed and fielded electronic jammers that prevent the bomb's trigger signal from reaching the explosive, the congressional report said. It also has pursued better vehicle armor.

The agency has been developing intelligence, fostering police work, funding surveillance and attacking insurgent networks that produce and set up the bombs. It has been involved in training troops on how to confront and look for the weapon.

Yet the report said the group needs to improve the way it measures its performance, because it isn't clear in many cases whether the group's actions or other factors have led to various strides in confronting roadside bombs.

The report also said the organization needs to widen its authority to include other agencies that confront roadside bombs, and get better oversight.

Smith, the spokeswoman for the Joint Improvised Explosive Device Defeat Organization, agrees with these conclusions.

She said the organization appreciates the opportunity to work with the Government Accountability Office, the investigative arm of Congress, "to identify and resolve any problem areas in our processes."

She said the cooperation among agencies is crucial.

"Global terrorism will continue to manifest itself through use of IEDs," she said.

All About Iraq • Afghanistan