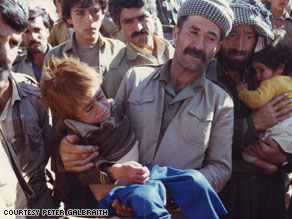 The Reagan White House saw it as a ruthless attempt to put down a rebellion by a minority ethnic group fighting for independence and allied with Iraq's enemy, Iran.

But Peter Galbraith thought it was something worse.

"A light went off in my head, and I said, 'Saddam Hussein is committing genocide,'" said Galbraith, who was on the staff of the Senate Foreign Relations Committee at the time.

An unabashed idealist, Galbraith was known for tackling unconventional issues.

Galbraith was one of the first Westerners to witness the effects of the slaughter. During a fact-finding trip for the Senate in 1987, he saw something troubling.

Christiane Amanpour introduces you to the courageous few who saw evil and tried to stop the killing.
December 4, 9 p.m. ET

"When we crossed from the Arab part of Iraq into the Kurdish part of Iraq, the villages and towns that showed on our maps just weren't there," he said. Bulldozing Kurdish villages was just the first phase of Hussein's war against the Kurds. In 1988, it escalated with chemical weapons.

"Thousands, maybe tens of thousands of people were killed in those attacks, and then Iraqi troops moved into those villages and gunned down the survivors."

Galbraith wanted to invoke the U.N.'s Genocide Convention, which requires countries to prevent and punish such crimes.

"We could not stand aside and allow Saddam Hussein to commit genocide against the Kurds of Iraq."

With the support of his boss, Democratic Sen. Claiborne Pell of Rhode Island, Galbraith drafted a bill -- the Prevention of Genocide Act -- that would cut off U.S. foreign aid to Iraq and impose a trade embargo.

"That would have been an appropriate response to a dictator who is gassing his own people," Galbraith said. "I thought with a name like that it would garner a lot of support."

But the compelling name was not enough. So Galbraith went back to the region to gather more evidence.

Watch as Galbraith describes his fight to end the slaughter »

Tens of thousands of Kurds had fled to Turkey. Survivors described blinding, burning clouds of poison gas that dropped people in their tracks.

"These people don't make up these stories. These are real stories. And if you talk to them, if you simply talk to them ... you know that they're telling the truth," Galbraith said.

His report was still not enough to persuade the White House to punish Saddam.

The Reagan administration had invested several years cultivating Iraq as an ally against Iran, their mutual enemy, and as a market for U.S. products, including more than $1 billion a year in farm exports.

The Prevention of Genocide Act would end the diplomatic courtship and hurt U.S businesses. Read once-secret documents from the Reagan administration

"I had a fellow who worked for one of the Louisiana senators call me up really in tears," Galbraith said. "And when I talked about genocide against the Kurds, he talked about the genocide that I was committing against the rice farmers of Louisiana."

To Galbraith, "that was a morally repugnant statement."

The Reagan administration also claimed Galbraith's bill used "inaccurate terms like genocide." But for Galbraith, this was no time for semantics.

In the end, the House of Representatives killed Galbraith's sanctions bill with backing from the Reagan administration. Politics had trumped principle.

"We were not able to modify Iraq's behavior," Galbraith said. "And guess what?"

This time, the U.S. compared Saddam to Hitler. And with Kuwait's oil at stake, the U.S finally screamed bloody murder.

All About Genocide • The Holocaust • Iraq