(CNN) -- Despite acknowledgment from the White House a day earlier that a peace deal between Israel and the Palestinians is unlikely before a new U.S. president takes office, Secretary of State Condoleezza Rice said Friday she is confident that ongoing efforts would produce success. 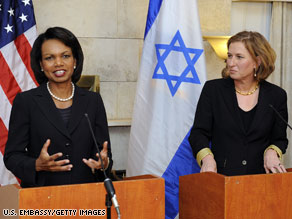 "Carried to its state of conclusion, it will produce a state of Palestine," Rice, referring to negotiations in the wake of last year's U.S. summit on Israel-Palestinian peace in Annapolis, Maryland, said at a joint news conference with Palestinian Authority President Mahmoud Abbas in Ramallah, West Bank. Rice is on her eighth trip to the region since the Annapolis summit.

On Thursday, White House spokeswoman Dana Perino said the Bush administration does not "think that it's likely that it (a peace agreement) would happen before the end of the year."

Rice said Friday that she realizes the lack of a peace agreement in the months following the Annapolis summit had caused some concerns that talks had stalled or might fail, but "it's quite the opposite -- the Annapolis process has laid the foundation for the eventual establishment for the state of Palestine."

The purpose of her current trip, Rice said, was "to advance the Annapolis process," and while she did not speculate on a timetable for the future of the process or offer specifics on peace talks, she added, "I've seen them move forward a great deal in the past year."

Both Israeli and Palestinian officials have expressed doubts about achieving a peace agreement before President Bush leaves office, but until this week U.S. officials had been more optimistic in their public comments.

Speaking in Israel on Thursday, Rice blamed part of the inability to secure a deal on recent political changes in Israel, which she noted is "in the midst of elections."

With Abbas on Friday, she emphasized that the commitment expressed by Abbas and Israeli Prime Minister Ehud Olmert when they signed an agreement to work toward a peace deal by the end of 2008 is still strong.

"I hope that the tremendous commitment (by both sides) is fully understood," Rice said.

While Rice did not discuss any impact a new administration in Washington might have on the process, she said, "The United States really does understand why the Palestinian people want unity."

Olmert resigned in September amid allegations of corruption.

Kadima Party leader and Israeli Foreign Minister Tzipi Livni gave up efforts to form a new coalition government late last month and is seeking to hold early general elections, which could be held in February, Livni's spokesman has said.

Olmert will continue to lead as Israel's interim prime minister until a successor assumes power either by forming a coalition in the current Knesset or through general elections. However, it is unclear whether he will be able to strike a deal with the Palestinians before Israel forms its new government.

Last month, Rice postponed a trip to a Middle East conference because of the global crisis in financial markets.