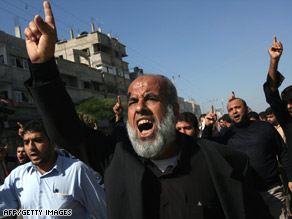 Palestinian security sources told CNN there were two Israeli airstrikes, though the IDF confirmed only one. The Palestinian sources said the first strike hit a group of Islamic Jihad militants, killing one and injuring three. The second, about five minutes later, tageted the rocket-launching squad, the sources said.

Forty rockets were fired from Gaza into southern Israel between Tuesday night and Wednesday morning, an IDF spokesman said. Initial reports gave a lower number of missiles. Israeli police said one rocket was fired into the Israeli coastal city of Ashkelon, but there were no reports of injuries or damage.

Four people were killed in Tuesday's airstrike, which targeted an area east of Khan Younis, Palestinian sources said. They said a drone and an Apache helicopter were seen.

The IDF said it launched a small operation Tuesday evening after its forces uncovered a "ready-to-be-used tunnel" several meters from a security fence. The IDF said the tunnel -- dug from a civilian home -- was meant for abducting Israeli soldiers.

Palestinian sources said the Israelis blew up a tunnel during the operation.

The IDF said it exchanged fire with militants during the operation, which it said lasted a few hours.