BAGHDAD, Iraq (CNN) -- The U.S. Embassy in Damascus announced that it will be closed Thursday because of "increased security concerns" arising three days after a U.S. strike in Syria. 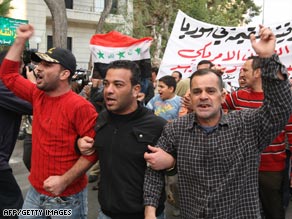 Iraqi refugees took to the streets in Damascus, Syria, on Wednesday to protest Sunday's airstrike.

Officials said the action was taken because of concerns over anti-U.S. demonstrations scheduled for Thursday over Sunday's airstrike, which Syria claims left eight people dead near the Iraq-Syria border.

Demonstrations were reportedly staged Wednesday throughout Syria to protest the incident, which has raised tensions among Iraq, Syria and the United States.

Tens of thousands of demonstrators took to the streets in Abu Kamal, Syria, near the Iraqi border, burning American flags and shouting angrily, the country's official news agency SANA reported.

The Syrians did not specify how long the closures would last, Wood said.

Connelly told Syrian officials that the United States "expects them to provide adequate security to the buildings" during the closures, Wood said.

Senior State Department officials said the U.S. was pushing back on the request to close the school, as were other international diplomats and Syrian families whose children attend classes there.

Syria has filed a complaint with the United Nations over the incident, which it has deemed an "act of aggression."

Syria says four U.S. helicopters based in Iraq launched the deadly airstrike on a farm under construction about five miles (8 kilometers) from the Iraq-Syria border, according to SANA.

Washington has not confirmed the strike. But a U.S. official who did not want to be identified said U.S. gunships fired near the Syria-Iraq border and successfully targeted Abu Ghadiya, an Iraqi suspected of working with al Qaeda to smuggle money, weapons and foreign fighters into Iraq.

Abu Ghadiya was "the top facilitator of al Qaeda foreign fighters into Iraq," according to a top U.S. military official in Iraq who did not want to be named for security reasons.

News of the embassy closure came as the Iraqi government announced Wednesday that it has opened an investigation into the airstrike.

Iraqi authorities said they plan to share their findings with Syria.

"All information and data [will be] submitted to the brotherly Syrian side upon the completion of investigations," the statement said, quoting an authoritative source in the Ministry of Foreign Affairs.

In its letter to U.N. Secretary-General Ban Ki-moon and the current head of the U.N. Security Council, Syria maintained that the U.S. helicopters "violated Syrian airspace" and struck a civilian building before returning to Iraq, SANA reported.

Farhan Haq, a spokesman for Ban's office, confirmed that the secretary-general had received the complaint and said it will be studied and circulated among Security Council members.

Another unnamed U.S. official in Washington disputed that women or children were killed.

Ali al-Dabbagh, the spokesman for the government in Baghdad, initially responded to the attack Monday.

"We want good relations, but we must remember that 13 Iraqi policemen ... were killed in an Iraqi bordering village near that region by a terrorist group that was operating from the Syrian territories," he said.

The Syrian government denounced that statement, state-run media reported. Al-Dabbagh issued a statement Tuesday saying the government in Baghdad condemned the attack and called on U.S. forces "not to repeat such acts."

Iraq's parliament issued a statement Tuesday expressing "great regret" over the strike, which it said threatens to "mar" Iraq's relationship with Syria.