U.N.: More than half of Iraqi city's Christians have fled

BAGHDAD, Iraq (CNN) -- More than half the Christian population has fled the northern Iraqi city of Mosul in reaction to a campaign of killings and intimidation, according to the United Nations. 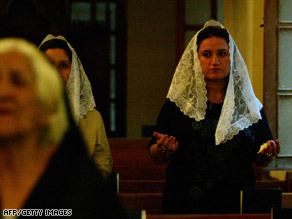 Christian women attend a religious service Sunday at a church in Baghdad.

An estimated 13,000 Christians have left because of oppression the U.S. government blames on al Qaeda in Iraq.

Mosul, in Nineveh province, is one of the last Iraqi cities where al Qaeda in Iraq has a significant presence and routinely carries out attacks.

An estimated 2,300 families have fled Mosul this month, but the exodus has started to ebb, Nineveh province's Deputy Gov. Khasro Goran said Tuesday. No Christian family has left the city over the past seven days, and at least 100 families returned to their homes in and around Mosul during that time, Goran said.

Authorities said they believe Christian demonstrations earlier this month may have prompted the attacks. Hundreds of Christians took to the streets in Mosul and surrounding villages and towns demanding adequate representation on provincial councils, whose members will be chosen in local elections in January.

The violence that followed those protests left at least 14 Iraqi Christians dead and prompted the Iraqi government to dispatch more security forces to patrol the city. Violence has declined as a result, Iraqi officials said.

Last week, U.S. Defense Department spokesman Geoff Morrell said the anti-Christian attacks and threats are partly "due to elements of al Qaeda that still enjoy some ability to operate up there."

"This is an attempt, it appears, to try to inflame tensions and fault lines that exist between religious and sectarian groups," Morrell said.

The U.N. High Commissioner for Refugees is helping many of the displaced families, most of whom have fled to nearby villages in Nineveh province. About 400 others have crossed into Syria, but many have said they no longer feel safe there, according to the refugee agency.

The U.N. agency said many of the Iraqi Christians told stories of intimidation and death threats.

"One woman said she and her mother left Mosul early last week, two days after someone called one of her colleagues at work and said that all Christians should leave the city immediately or be killed," according to a UNHCR news release.

"She said she was unnerved but decided to leave only after hearing reports that 11 people had been killed at a checkpoint by militiamen dressed as police officers. She and her mother escaped with a couple of bags and all the money that they had in the house -- they did not dare go to the bank to remove their savings."

A nurse told UNHCR that the threats against Christians in Mosul began months ago "with phone calls, letters and messages left on doors."

In other violence Tuesday in Mosul, four police officers were killed and four wounded when gunmen opened fire on their vehicle, an Iraqi Interior Ministry official said.

Gunmen in cars ambushed police as they were on their way to start work in west Mosul's al-Amil neighborhood, the official said.

Also Tuesday in Baghdad, six civilians died and 23 were hurt in four bombings, the official said.

In eastern Baghdad, in the Shiite al-Baladiyat neighborhood, a roadside bomb exploded Tuesday afternoon, killing one civilian and wounding five others, the official said.

Earlier, a parked car exploded near a busy outdoor market in the western al-Jihad neighborhood, killing at least five people and wounding 11 others, the Interior Ministry official said.

No other details were available about the blast.

Also Tuesday, the Iraqi army and police discovered 20 decomposed bodies in the basement of an abandoned house in Tal Afar, a town about 43 miles (70 kilometers) west of Mosul.

There was no indication of how the victims -- who could not immediately be identified -- were killed, the official said.

Authorities discovered the bodies after receiving tips from local residents.

All About Mosul • Al Qaeda in Iraq • Baghdad