BAGHDAD, Iraq (CNN) -- A bomb attached to a car carrying an Iraqi army general exploded Saturday afternoon, killing the driver and wounding the general and a bystander, an Interior Ministry official said. 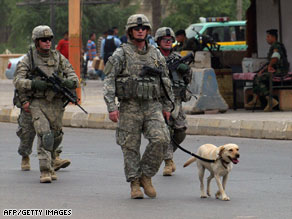 The official said Gen. Abdul Karim Jabbar was seriously wounded when the bomb went off between al-Firdous Square and al-Andalus Square.

The U.S. military refers to bombs attached to civilian vehicles without the driver's knowledge as "sticky bombs."

Separately, a civilian was killed and five were wounded in afternoon clashes between gunmen and Iraqi National Police in the al-Shaab neighborhood of northeastern Baghdad, the ministry official said.

In the same neighborhood, a roadside bomb exploded at an Iraqi army checkpoint Baghdad, killing a child, the Interior Ministry official said.

Also Saturday, two Iraqi soldiers were killed and another was wounded when a roadside bomb struck an Iraqi army patrol on Palestine Street in eastern Baghdad.