BAGHDAD, Iraq (CNN) -- U.S. troops or contractors who commit "major and premeditated murders" in Iraq while off-duty and outside U.S. facilities would fall under Iraqi jurisdiction, according to a copy of a draft U.S.-Iraq agreement obtained by CNN. 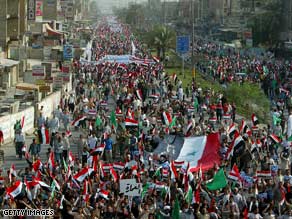 All other crimes -- including murders committed inside U.S. facilities or by on-duty forces -- would fall under American jurisdiction, according to the draft, which would govern U.S. troops' presence in Iraq.

The issue of whether U.S. troops would remain immune from Iraqi prosecution has been a sticky one for negotiators crafting the Status of Forces Agreement draft, which Iraqi lawmakers are reviewing. The United States had preferred its troops and contractors retain immunity.

The draft also calls for U.S. combat troops to be out of Iraqi cities by July 30, 2009, and out of the country entirely by December 31, 2011. The agreement allows for an earlier withdrawal or an extension of the U.S. forces' stay in Iraq, by agreement of both parties.

The governments have been trying to get a deal before December 31, when a U.N. mandate authorizing the U.S. troop presence in Iraq expires.

The United Iraqi Alliance bloc found several "points" in the draft that "need more time for discussion, dialogue and amendments [to] some of its articles," according to the Supreme Islamic Council of Iraq, the most powerful party in the bloc.

It was unclear what specific "points" the parliamentary bloc was questioning.

Thousands of people marched in central Baghdad on Saturday to protest the draft U.S.-Iraqi security agreement. The political party of Iraqi cleric Muqtada al-Sadr called for the rally.

Baghdad had sought the power to arrest and try Americans accused of crimes that are not related to official military operations, plus jurisdiction over troops and contractors who commit grave mistakes in the course of their duties.

The United Iraqi Alliance on Sunday night discussed the draft, which was presented by Iraqi Prime Minister Nuri al-Maliki, whose Dawa Party is also a member of the ruling bloc.

Iraq's Political Council for National Security needs to approve the draft before al-Maliki sends it to his cabinet. The council includes the leaders of various political blocs -- including the United Iraqi Alliance -- as well as Iraq's president, prime minister, vice presidents, and speaker of parliament.

If the cabinet passes the draft by a two-thirds majority, al-Maliki will submit it to the Iraqi parliament for approval.

A senior Bush administration official said last week that the U.S. is examining "contingencies" in case the Iraqi government is unable to sell the status-of-forces deal to the country's various factions.

If Iraq does not approve the deal, fallback options include "a new U.N. Security Council resolution legally authorizing the extension of the U.S. footprint" or an "informal agreement between the United States and the Iraqis," the official told CNN last week.

The official spoke on condition of anonymity because of the sensitivity of the discussions.

Secretary of State Condoleezza Rice is lobbying Iraqi leaders to pass the draft text of the agreement by the end of the year, State Department spokesman Sean McCormack said last week.