BAGHDAD, Iraq (CNN) -- Thousands of people marched in central Baghdad on Saturday to protest a proposed U.S.-Iraqi security agreement that would extend the presence of U.S. troops in the country after the end of the year. 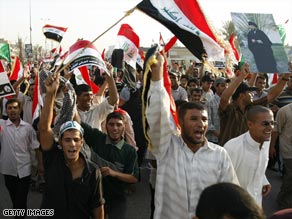 The political party of Iraqi cleric Muqtada al-Sadr called for the rally. At one point, several speakers at a podium addressed the mass of people, urging the Iraqi government to reject the proposal.

"End the U.S. occupation of Iraq!" one speaker shouted in English.

Hazem al-Araji, a senior al-Sadr aide, told protesters their voices would be heard in America.

"Thanks to you, to these voices and the millions of voices, George Bush will hear these millions of calls in his 'Black House' -- in which you shouted out, 'No, no, America!'" he said.

Protesters clogged several streets in the capital, waving Iraqi flags and kicking up dust. The demonstration, the largest in Baghdad in several months, was largely peaceful.

Pentagon spokesman Geoff Morrell said in Washington on Thursday a draft status-of-forces agreement authorizing the U.S. troop presence in Iraq had "been agreed upon by U.S. and Iraqi negotiators" and was being reviewed by the two governments.

A U.N. mandate authorizing the U.S. troop presence in Iraq expires December 31, and U.S. officials are examining "contingencies" in case the Iraqi government is unable to sell the status-of-forces deal to the country's various factions, a senior Bush administration official said this week.

The same official said negotiations on the pact had finished and the text was final. The official said the "final" draft calls for U.S. troops to be out of Iraqi cities by June 2009 and out of Iraq by the end of 2011 unless the Iraqis ask the United States to stay.

The U.S. official, speaking on condition of anonymity because of the sensitivity of the discussions, said negotiators had also "reached a compromise" on the issue of U.S. troops remaining immune from Iraqi law -- an issue that was a major hurdle in the talks.

Baghdad has sought the power to arrest and try Americans accused of crimes not related to official military operations, plus jurisdiction over troops and contractors who commit grave mistakes in the course of their duties.

The United States has insisted its troops and contractors remain immune from Iraqi law.

All About Iraq • U.S. Armed Forces