WASHINGTON (CNN) -- U.S. and Iraqi negotiators have agreed on a draft of a status-of-forces agreement authorizing U.S. troop presence in Iraq, a Pentagon spokesman said Thursday. 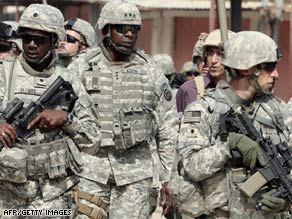 The U.S. wants troops in Iraq to be immune from Iraqi law.

Morrell said Defense Secretary Robert Gates "is in the process of consulting closely with members of Congress" on the draft agreement.

"We are close, but not at the final status yet," Morrell said. "And as soon as it is final, I think then we can talk in more specificity about what is actually included in it."

The United States' insistence that its troops and contractors remain immune from Iraqi law has been a key obstacle to reaching an agreement, U.S. and Iraqi officials have said.

A U.N. mandate authorizing the U.S. troop presence in Iraq expires December 31, and U.S. officials are examining "contingencies" in case the Iraqi government is unable to sell the status-of-forces deal to the country's various factions, a senior U.S. official said earlier this week.

• Representatives from Bahrain, Syria, Jordan and Spain took their posts Thursday as ambassadors to Iraq after submitting their credentials to Iraq's president, the Iraqi government said.

• The governments of Iran and Iraq signed an agreement Thursday aimed at jointly clarifying the fate of those missing from the Iran-Iraq war in the 1980s, the International Committee of the Red Cross said.

CNN's Saad Abedine and Mohammed Tawfeeq contributed to this report.