Stage being set for Iraqi elections as violence flares 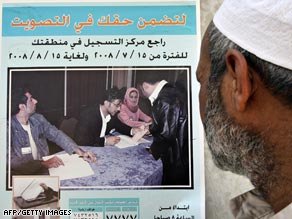 An Iraqi looks at an ad for elections, planned for October but postponed over Kurdish objections.

The Diyala governorate, however, put the death toll at 35 -- 27 police and eight members of the anti-al Qaeda Sons of Iraq, an Awakening Council.

The bill's passage by 191 of the 275 members of Parliament is considered a major step toward national reconciliation among Iraqi Sunni Arabs, Shiites, and Kurds.

The attack came during a joint patrol by police officers and Sons of Iraq, the sources said. The Awakening Councils are composed largely of former Sunni insurgents who turned against al Qaeda.

Earlier Wednesday, gunmen opened fire on the vehicle of an Interior Ministry official, wounding him, his driver and a civilian bystander in eastern Baghdad.

The long-awaited election law, which outlines guidelines for the balloting, was sent to the Presidency Council for its vote. All three members must approve it unanimously before it can go into effect.

Once accepted, Iraq's electoral commission will set a date for the provincial elections, which authorities hope can be held by the end of the year.

Abdulla said Kirkuk, center of the northern Iraqi petroleum industry, is excluded from the elections at the moment. The law passed Wednesday would give lawmakers until January 31 to draft a separate law for for that region, he said.

Iraqi President Jalal Talabani, who is a Kurd, was one of two members of the presidency council who vetoed the legislation before Parliament took its break at the end of July.

Talabani said he rejected the measure because the law contained "constitutional and procedural violations which would ruin the atmosphere of national agreement upon which the political process was built."

The Kurdish opposition stemmed from intense political disputes among the Kurds, Arabs, and Turkmens in the Kirkuk region, which is regarded by the Kurds as a majority Kurdish area. Kurdish lawmakers boycotted the last Parliament vote.

The Kurds oppose any power-sharing arrangement that would not reflect what they believe is their majority, and they had sought a long-delayed referendum that would ask Kirkuk residents whether they want to be part of the Kurdish Regional Government.

Iraqi government spokesman Ali al-Dabbagh predicted in early September that the elections law would pass swiftly, and the vote held at the end of the year or possibly the beginning of 2009.

Al-Dabbagh said the Kirkuk issue can be delayed because there is a clause in the provincial elections legislation that permits the postponement of an election in any province. Kirkuk is part of Tameem province in northern Iraq.

If the presidency council fails to approve the law this time, Iraq could face the problem of having its 18 provinces run by temporary councils whose legal existence expires on December 22.

All About Iraq • Kirkuk • Jalal Talabani