JERUSALEM (CNN) -- Israeli Foreign Minister Tzipi Livni declared victory Thursday in an election to lead the ruling Kadima Party, putting her on a path that could make her Israel's first female prime minister in 34 years. 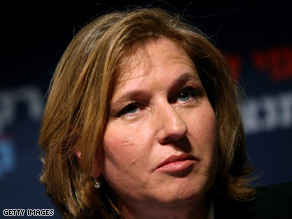 Livni won with 43.1 percent of the vote, claiming a 431-vote margin of victory over Transportation Minister Shaul Mofaz, the Kadima Party said.

Mofaz announced Thursday he will take a "time out" from politics and will resign his seat in the Israeli parliament, the Knesset. But he indicated he does not intend his departure from front-line politics to be permanent.

Livni's election marks a stunning rise for the 50-year-old, who entered the Knesset less than 10 years ago.

"It's a leap of faith for the people," analyst Avi Shavit said. "They decided to trust a candidate they don't know much about."

She may owe her victory over Mofaz, a former general, to her reputation for clean hands in a party losing its leader to allegations of graft.

"Kadima members are more concerned about the corruption threat inside Israel than the security threat from Hamas and Iran," Israeli columnist Gil Hoffman said.

As new leader of the ruling party, Livni will try to form a coalition government and become prime minister after the departure of Prime Minister Ehud Olmert, who has been dogged by allegations of corruption.

Olmert plans to inform the Cabinet on Sunday that he will resign, said Mark Regev, his spokesman. He has congratulated Livni and pledged to help make a smooth transition, according to Regev.

Livni told reporters Thursday that she intends "to bring together Kadima factions and to go on this new path together."

Watch Livni at the ballot box »

Her slim margin of victory stood in contrast to exit polls that had shown her with a commanding lead over Mofaz and other rivals. Mofaz telephoned Livni to congratulate her on the victory, according to Israel Radio.

Livni said she hoped to ensure stability in Israel's government.

Livni has about 42 days to form a coalition government. If she fails, there could be early elections that could see another party leader elected as Olmert's successor to the prime minister post.

There are many possible scenarios that could take place in the following months.

Ehud Barak -- leader of the Labor Party, which holds the most parliamentary seats among Kadima's coalition partners -- could pull out of the coalition. That could force early elections, or force the government to take on new coalition partners who could restrict Livni's ability to negotiate with the Palestinians.

If elections are called, Barak, a former prime minister, could vie for the top spot -- but polls show he may not have enough support.

Some observers think that former Prime Minister Benjamin Netanyahu, head of the opposition Likud Party, could steal the show in the end.

Whoever succeeds Olmert as prime minister will be handed a set of daunting challenges, including determining the fate of Israel's talks with the Palestinians, its fledgling indirect talks with Syria and its tough talk on Iran's nuclear aspirations.

Livni, who is more widely known outside Israel than her main challenger, is the chief Israeli negotiator with the Palestinian Authority as the two sides work toward a peace deal.

She refuses to be tied to the Bush administration's vision of a peace deal by the end of this year.

"We want to reach an agreement which at the end of the agreement we can find the words 'end of conflict,'" she said. "And in doing so, it takes time."

To her supporters, she is squeaky-clean and a welcome change to Olmert, whose resignation comes amid mounting corruption charges.

"She's very honest, very sincere and I hope she's going to do whatever she says," one of her supporters said. "We have to give her a chance and I'm willing to do it."

CNN's Paula Hancocks and Michal Zippori contributed to this report.