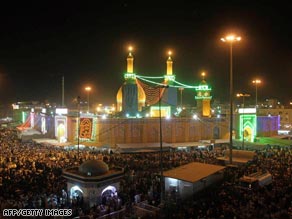 One of the blasts to hit Karbala came close to the Imam Abbas mosque, pictured here in August.

There were no claims of responsibility so far for incidents at the Imam Hussein and Imam Abbas mosques -- two of the holiest shrines for Shiite Muslims -- who regularly make pilgrimages to the sites in the south-central Iraqi city.

The first bomb, which had been placed in a trash bag, detonated shortly after 11 p.m. (4 p.m. ET) Wednesday about 800 meters (875 yards) from the Imam Hussein shrine and 200 meters (218 yards) from an Iraqi security forces checkpoint, the official said. One woman was killed and 12 others, including women and children, were wounded.

About an hour later, an explosive device placed in a car detonated about 500 meters (547 yards) from the Imam Abbas shrine, the official said. The attack killed one civilian and wounded three, and damaged a number of the houses in the area.

The two shrines are about several hundred meters from each other. Hussein, the grandson of the Prophet Mohammed, is revered by Shiites, while Abbas is Hussein's half-brother. Their tombs are located in the shrines.

The battles spread to other Shiite communities in Iraq, and eventually died down and led to al-Sadr's call for a cessation of activities by the militia. U.S. and Iraqi authorities said that cease-fire was a factor in decreasing the violence that had been raging in Iraq.

Bomb attacks near other religious shrines in Iraq have happened several times in the past.

The bombing of the Askariya Mosque, a Shiite shrine in the northern Iraqi city of Samarra in February 2006, sparked sectarian violence that led to thousands of deaths and caused people to flee their homes for other parts of Iraq and other countries.

In Baghdad's Sadr City, a Shiite neighborhood, a roadside bomb killed three Housing Ministry employees and wounded three others Thursday morning. The people were in a minibus at the time, the Interior Ministry said.

All About Iraq • Karbala