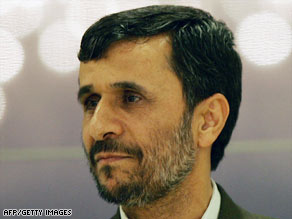 Iran announced nearly a year ago, in September 2007, that it had more than 3,000 active centrifuges. In April, President Mahmoud Ahmadinejad promised to install 6,000 more over the coming year.

The United States and other Western nations believe Iran's nuclear program is intended to develop nuclear weapons, but Iran insists it is only for peaceful purposes.

The United Nations already has three sanctions resolutions against Iran for failing to suspend the program. Attar said Thursday the sanctions are "futile and ineffective," IRNA reported.

"Had Westerners become certain that the resolutions would bring us down to our knees, they would have definitely intensified (the sanctions)," IRNA quoted Attar as saying.

The five permanent members of the U.N. Security Council and Germany -- a group called P5+1 -- offered a package of economic and other incentives to Iran in July if it suspended its nuclear enrichment program.

Iran failed to meet the group's deadline to accept the offer, leading the P5+1 to discuss further sanctions against Iran, a State Department spokesman said this month.

All About Iran • Nuclear Weapons