BAGHDAD, Iraq (CNN) -- "There are the bloodstains on the wall, and here it is dried on the floor," Abu Muhanad said as he walked through a torture chamber in a Baghdad mosque where more than two dozen bodies have been found. 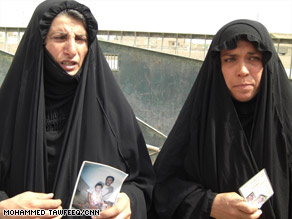 Two women clutch photographs of loved ones believed killed by the Mehdi Army.

"And here, a woman's shoes. She was a victim of the militia. We found her corpse in the grave."

Chunks of hair waft lazily across the floor in the hot Baghdad breeze.

"This was the torture room," said Muhanad, the leader of a U.S.-backed armed group that now controls the mosque.

"This is what they used for hanging," he said, pointing to a cord dangling from the ceiling. "Here is a chain we found tied to an old man's body."

Go inside the mosque's torture chamber »

The horrific scene at this southwestern Baghdad mosque is what officials say was the work of a Shiite militia known as the Mehdi Army. Residents who live near the mosque say they could hear the victims' screams.

The militia had been in control of the mosque, called Adib al-Jumaili, from at least January 2007 until May of this year. Residents say coalition forces weren't in the region and the torture and killings went unchecked.

The neighborhood lies in an area that became one of the capital's many sectarian fault lines when violence was at its worst.

It's been about three months since the Mehdi Army, loyal to radical Shiite cleric Muqtada al-Sadr, abandoned this mosque as it withdrew from several strongholds across the country.

Spray painted on the walls is a chilling warning: "Spies, you will dig your own graves. Long live the Mehdi Army."

Now the mosque is under the watch of the Sons of Iraq, a local armed group that is largely financed by the Americans working alongside the Iraqi police. They are charged with trying to keep the peace in the neighborhood.

Muhanad is their leader.

"We found this chain on an old man's corpse that we dug out of the grave," he said, gesturing to a bloodied chain on the floor. "We recovered about 22 corpses and then another five."

Only now are people able to understand the true magnitude of the Shiite militia's atrocities and the brutal laws they were enforcing on the people.

"This was my son's grave," Abu Wissam said, pointing to one of the many shallow holes in the mosque's garden. "We recovered his corpse completely rotten. His hands and legs were amputated, and his head was decapitated."

"He was just a college graduate," his mother sobbed, clutching her 25-year-old son's photo.

They say the Mehdi Army abducted their son about a year ago, accusing him of being a traitor. They shot up and looted his home. The family fled.

A gruesome video of their son's mutilated body was delivered to their doorstep.

The militia "still raid our homes," Abu Wissam said. "Their families are in the district. The day before yesterday, at noon, they tried to assassinate me, but I was able to call the police for help."

The neighborhood is eerily deserted. Most of the residents fled the militia's reign; many who stayed bore the brunt of the violence. Homes stand abandoned, shops shuttered, buildings shot up.

A single car drives down the main street as a pack of dogs runs through the twisted piles of metal that was once an outdoor market.

Lingering at the mosque are a handful of residents whose loved ones were also abducted, looking for clues.

"They said they were just taking him for a few minutes, for an investigation," said Karima, who only wanted to be identified by her first name, as her eyes filled with tears. "But they never released him and we heard he might be buried behind the mosque."

Umm Diab's breath came in shallow gasps as tears flowed from her turquoise-green eyes. She wiped them away using the corner of her abaya, or robe. In her hand, there's a passport photo of her father, who was abducted by the militia.

"All we want are their dead bodies," she said.

Although the Mehdi Army has moved out of this mosque and is less visible on the street, residents know that they're not gone.