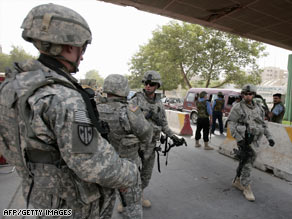 U.S. troops patrol near a checkpoint in Baghdad last week.

Another soldier was wounded in the attack and taken to a combat support hospital, according to military spokesman Lt. David Russell.

The deaths follow an incident Saturday in which a U.S. soldier died and two others were injured when their vehicle rolled over at a forward operating base near Balad, north of Baghdad, Russell said.

July marked the lowest monthly toll of the war, with 11 U.S. troop deaths -- six killed in hostilities and five dying from causes not related to combat, according to a CNN count of figures released by the Pentagon.

With the three deaths in August, 4,130 U.S. military personnel have died since the Iraq war began in 2003.

• A roadside bomb targeting an Iraqi army patrol detonated Monday morning on Palestine Street in eastern Baghdad, killing two people and wounding 15, an Iraqi Interior Ministry official said. The deaths include one Iraqi soldier, while nine Iraqi soldiers were among the wounded.

• Also on Monday morning, a roadside bomb detonated near an Iraqi police patrol in the southern Baghdad district of Dora, wounding two people, including one policeman, the ministry official said.

• Late Sunday, a parked car bomb exploded outside a coffee shop in Hilla, a Shiite city about 62 miles south of Baghdad, killing one civilian and wounding 12, the ministry official said.

• U.S. soldiers and Iraqi police on Sunday detained a "special groups" criminal in southern Baghdad's Rashid district, according to the U.S. military. "Special groups" is the term the U.S. military uses to describe Iranian-backed militias operating in Iraq. The military said the suspect was detained for "allegedly committing acts of violence against Iraqi security and coalition forces."

• U.S. soldiers and Iraqi security forces uncovered several weapons caches in Baghdad on Sunday, including various mortar rounds and a rocket-propelled grenade launcher, the U.S. military said Monday. Some of the mortar rounds were handed over to coalition soldiers by "Sons of Iraq" members, who are predominantly Sunni groups that have turned against al Qaeda in Iraq.

• U.S. and Iraqi soldiers uncovered a weapons cache on Friday near Mahmoudiya -- about 35 km southwest of Baghdad -- that included a 100-pound bag of C-4 explosive, four wired blocks of C-4, and various weapons and ammunition, the military said Monday. Iraqi soldiers detained three men who had the cache.