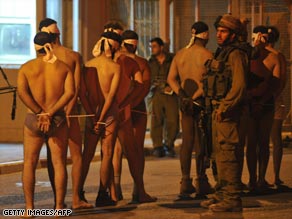 Fatah members are led handcuffed and blindfolded through a Gaza City checkpoint into Israel on Saturday.

They were let in at the request of Palestinian Authority President Mahmoud Abbas after Hamas took control of a neighborhood in eastern Gaza City on Saturday.

The Palestinians entered through a security checkpoint in Nahal Oz in the Gaza's northern region Saturday afternoon, the spokesman said.

"They were asking to enter the state of Israel after being threatened by Hamas gunmen," the spokesman said.

The spokesman said the Palestinians, some of whom were wounded, were allowed to cross the border after they disarmed. He also said they would be asked about the events leading them to seek refuge in Israel.

Those who suffered injuries were taken to a facility to receive medical treatment.

It was a rare act that could be interpreted as a sign of Israel's support of the Fatah party, which is led by Abbas.

"It was a sort of humane gesture," the IDF spokesman said.

The violence in the large neighborhood left four people dead, including two police officers, and wounded at least 60 others.

Watch a report on the violence »

The IDF confirmed that some of the Palestinians who entered Israel on Saturday were members of the clan.

Hamas Interior Minister Said Salam said in a news conference that bomb-making materials were found. He asked why so many people would have fled to Israel if they weren't guilty.

Hamas forces began raiding houses in the 15-block neighborhood after the fighting died down, arresting at least 12 men Saturday night.

Hamas security forces in Gaza had already detained hundreds of people affiliated with Fatah since five Hamas militants and a child died in the July 25 beach bombing. Fatah sources say about 450 were apprehended.

Among the dead in the beach attack was Amar Musubah, a Hamas military commander, who has been the target of Israeli military assassination attempts.

Fatah denied responsibility for the attack.

Hamas also shut down a radio station, accusing it of airing pro-Fatah broadcasts.

The supply tunnel, which collapsed near Rafah, was one of many dug along the Gaza-Egypt border in the past year, since Israel closed border crossings.

The move followed Hamas' takeover of the territory.

The tunnel operations have grown into a big business. The tunnels are sometimes built too close to each other for safety.

Journalist Talal Abu-Rahmi in Gaza contributed to this report.