WASHINGTON (CNN) -- The United States has "wasted" more than half a billion dollars in Iraq repairing facilities that were damaged because of poor security, the special inspector general for Iraq reconstruction says in a report released Wednesday. 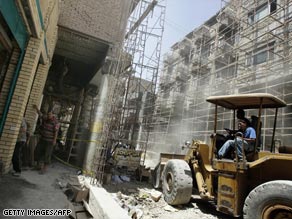 Workers clear debris during reconstruction along al-Mutanabi Street in central Baghdad, Iraq, in May.

Stuart Bowen's quarterly report arrived at a price tag of $560 million by tallying the results of more than 100 audits his office has conducted.

Further billions had to be diverted from reconstruction to security because the Bush administration did not adequately foresee how volatile Iraq would be when it began rebuilding the country, the report says.

"The U.S. government did not fully anticipate or plan for the unstable working environment that faced U.S. managers when reconstruction began in Iraq," it says.

Contractors spent an average of 12.5 percent of their reconstruction contracts on security, the inspector general found.

The lack of cooperation "contributed to delays, increased costs, terminated projects, and completed projects that did not meet program goals," the report says.

But the report reflects some cause for optimism about Iraq's future, even as it describes developments in economics, essential services, governance and security as a "mixed bag."

Iraq produced 2.43 million barrels of oil a day in the past quarter, which the report calls "the highest quarterly average since the 2003 invasion."

It cites "improved security," including a $34 million program to protect a key pipeline.

"The $34 million Kirkuk-to-Baiji [pipeline exclusion zone] segment is a system of ditches, berms, fences, and concertina wire protecting oil pipelines, which are secured by Iraqi security forces. The success of the program is evident in the fact that there have been no successful attacks on northern oil lines this year," the report says.

As a result of higher oil prices and better security, Iraq stands to reap twice as much money from oil this year as it predicted.

Iraq's government estimated in November that oil income in 2008 would amount to $35 billion.

"But with oil now hovering around $125 per barrel -- about five times what it was five years ago -- and Iraq's oil production at record levels, [the special inspector general] estimates that oil revenues for 2008 could exceed $70 billion," the report says.

The country has claimed more than $33 billion in oil revenue this year, the inspector general says.

That "means that potentially $7 billion in new funds could soon be budgeted to further support the country's continuing reconstruction program," the report suggests.

And "Iraq's ministries of Defense and Interior continue to shoulder more of the financial burden for supporting the operations, training, and equipping of Iraq's security forces," it says.

Along with Iraq's oil windfall from this year, "significant amounts of unspent money from the 2006 and 2007 Iraqi budgets remain available for further infrastructure investment" by the government of Iraq, Bowen's report says.

"Growth continues in Iraq's electricity sector," it says, and on July 8, "peak generation reached 5,615 MW, and substantial increases in generation capacity are expected as projects come online toward the end of this year, which could add up to 1,600 MW to the grid."

But the quarterly report to Congress also warns of deep problems in planning, foresight and project development.

The report covers the ups and downs of policies and issues faced by Iraq, including security strides and political development, and it explains audits that illustrate failed or troubled projects.

It reports problems with several reconstruction projects, with the "most egregious failure" being the $40 million Khan Bani Sa'ad Correctional Facility in Diyala province.

The report says the project "was eventually abandoned by U.S. reconstruction managers along with over a million dollars worth of material and equipment left onsite."

An inspection this quarter found that, "although security concerns affected the project, the quality of construction was so poor that some sections need to be demolished and reconstructed," the report says.

An assessment of the "failed prison project" at Khan Bani Sa'ad said that "more than $40 million was spent on this ill-fated project, but its abandonment leaves no apparent prospect of being completed."

Additionally, the United States failed to consult with the new Iraqi government, leading to more wasted spending. "U.S. agencies made many decisions about investments without ascertaining Iraqi needs or obtaining the views and buy-in of Iraqi officials," the Bowen report concludes.

One example in the report is that the U.S. authority in Iraq decided the Iraqis needed a financial management information system but never considered the host country's requirements. As a result, the program was stopped because the Iraqi government did not support it and, more troubling, because the project leader was kidnapped.

The 270-page report is the latest comprehensive quarterly look by the special inspector general at the state of Iraq reconstruction across all sectors and geographic regions.

It comes as the U.S. surge brigades leave Iraq and the country attempts to improve and expand its security forces, foster political reconciliation, and improve essential services.

Part of the report reviews the inspector general's previous 122 audits of reconstruction projects to recommend to the White House and Congress ways for improving progress.

Pentagon spokesman Geoff Morrell said Wednesday that the report presents "nothing new" but that officials will use the document to learn and build on.