BAGHDAD, Iraq (CNN) -- Four female suicide bombers and a gunman killed at least 70 people and wounded almost 300 others during a string of attacks in central Baghdad and Kirkuk on Monday, officials said. 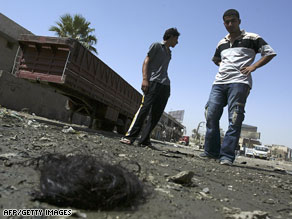 In Baghdad, three suicide bombers detonated their explosives in three locations within 30 minutes of each other. The attacks killed at least 32 people and wounded 102 others, most of them Shiite pilgrims, an Interior Ministry official said.

It was the second day attackers have targeted Shiite pilgrims taking part in an annual march to one of the Shiites' holiest shrines.

On Sunday afternoon, seven pilgrims were gunned down in a town south of Baghdad.

Watch the pilgrims on the move »

About 150 miles north of the capital, another suicide bomber ran into a crowd of protesters at a Kurdish political rally, a police official said. After she detonated the explosives she was carrying, gunmen began firing into the crowd from different directions, the official said.

The attack killed at least 38 people and wounded 178 others, the official said.

A bomb was discovered in a parked car near the site of the attack. It was destroyed in a controlled explosion by Iraqi security forces, an Interior Ministry official said.

Thousands of Kurds had gathered in central Kirkuk to protest an election law that the Iraqi parliament passed last week, despite opposition from the Iraqi presidency council.

The Kurds consider the region encompassing Kirkuk -- a city of Kurds, Arabs and Turkmen -- majority Kurdish.

The Kurds, who have had intense political disputes with Arabs and Turkmen, oppose any power-sharing arrangement that would not reflect what they believe is their majority. They also want a referendum asking Kirkuk residents whether they want to be part of the Kurdish Regional Government.

Following Monday's attack, Kirkuk authorities imposed a curfew on the city from 3 p.m. Monday until 7 a.m. Tuesday, a police official said. All cars and pedestrian traffic will be banned, he said.

The Iraqi Islamic Party, one of the main Sunni parties, condemned the Kirkuk attack, blaming it on "sides that do not want stability in the city and are working to escalate the situation."

It said the attack comes at a "critical and sensitive time where there has been an increase in talks about the fate of Kirkuk and provincial council elections."

The use of female bombers is an increasingly common method for staging suicide attacks in Iraq because male security forces will not search women and few women have been trained to conduct searches.

Nearly two dozen suicide attacks have been carried out by female bombers in 2008 -- up from eight in 2007 -- according to U.S. military figures.

Before the bombings, security officials said they had deployed more than 200 women to conduct searches in Kadhimiya, in northwestern Baghdad, because of the rise in female suicide bombers.

The Sunday attack on Shiite pilgrims happened in the predominantly Sunni area of Salman Pak, also referred to as al-Madaen. The Shiite pilgrims were walking to a shrine in Kadhimiya that commemorates the 8th century death of Imam Moussa al-Kadhim.

The pilgrims -- all males -- were carrying black flags and chanting religious songs before the attack.

They were attacked in a region that al Qaeda in Iraq controlled before Iraqi security forces gained control. Al Qaeda in Iraq cells reportedly remain in villages around the town.

In recent days, hundreds of thousands of Shiite pilgrims have begun walking to Kadhimiya for the annual commemoration of al-Kadhim's death. Many have traveled from across the country, especially from Iraq's southern Shiite provinces.

Pilgrims have been warned against accepting food and drinks from strangers. They've also been told to discount rumors of suicide bombers. Such a rumor triggered a stampede that killed about 1,000 people during the pilgrimage in 2005.

All About Iraq • Iraq War • Baghdad • Al Qaeda in Iraq