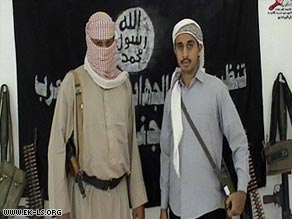 "This attack was carried out in revenge for our brothers whose blood is on the hands of the infidel Yemeni forces," according to an e-mailed statement that included a photo of the alleged suicide attacker.

He is standing next to another man whose face is covered in front of a black-and-white banner. Both men have weapons slung across their shoulders; guns and ammunition belts are also pictured beneath the banner in the background. Al-Mashjari is wearing a black and white head covering, but his face is visible.

The e-mailed statement was dated July 25, the day of the attack, but it was distributed and posted online on Sunday.

According to Yemen's state-run news agency SABA, a suicide car bomber crashed the white 2003 KIA into the gates of the security camp in the southern city of Sayoun on Friday, prompting guards to open fire on the attacker.

The SABA report gave no details on casualties. Yemen's Interior Ministry said four people were killed and 12 were injured, but the Yemen Post, an English-language newspaper that covers events in Yemen, put the number at 10 dead and about a dozen wounded.

Hadramout's governor Saleh al-Khanbashi described the bombing as a criminal terrorist act, and threatened to track down and bring to justice those responsible, SABA reported.