Editor's note: CNN agreed to change the names of the two men in this article to protect their identities. 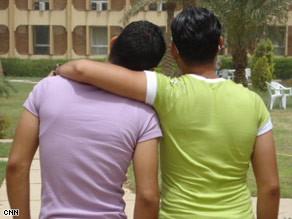 Rami and Kamal, both gay Iraqis, say they rarely show affection for men in public.

BAGHDAD, Iraq (CNN) -- Kamal was just 16 when gunmen snatched him off the streets of Baghdad, stuffed him in the trunk of a car and whisked him away to a house. But the real terror was about to begin.

The men realized he was gay, Kamal said, when he took his shirt off and they saw that his chest was shaved.

"They told me to take off my clothes to rape me or they would kill me immediately. This moment was the worst moment in my life," he said, weeping as he spoke of the 2005 ordeal.

"I was watching them taking off their clothes, preparing to rape me. I did not know what to do, so I started shouting loudly, 'Please do not do that! I will ask my family to give you whatever you want.' "

Watch the tormented life of gays in Iraq »

His pleas went unheeded. "The other two kidnappers took off my clothes by force, and, at that time, I saw them as three dirty animals trying to tear my body apart."

CNN spoke with Kamal, now 18, and his 21-year-old friend Rami about what it's like to be gay in Iraq. Coming out as gay is not easy in any country, but to do so in Iraq could mean a death sentence or torture.

The two men rarely show feelings toward each other in public. They spend a lot of time in Internet cafes in Baghdad, surfing gay chat rooms and seeking contacts with other gay men in Iraq and elsewhere.

Since the fall of Saddam Hussein in 2003, the situation for gays and lesbians in Iraq has deteriorated. Ridiculed under Hussein, many now find themselves the targets of violence, according to humanitarian officials.

Lesbians are also victims of harassment and violence, but not nearly as often as gay men.

It's unknown how many homosexuals have been killed by militias in the lawless streets of Iraq's cities, but some Web sites post pictures of Iraqis they say were killed for being gay.

One photo on the Iraqi Lesbian, Gay, Bisexual and Transgender site shows a group of men standing around three male bodies sprawled on a street, blood pouring from their heads. "Gay Iraqi victims of the police and death squads," the site says.

A U.N. report on human rights in Iraq reinforces the accusations of violence. Although gays are supposed to be protected by law in Iraq, it says, they face extreme brutality.

"Armed Islamic groups and militias have been known to be particularly hostile toward homosexuals, frequently and openly engaging in violent campaigns against them," the report said, adding that homosexuals have been murdered.

"Militias are reportedly threatening families of men believed to be homosexual, stating that they will begin killing family members unless the men are handed over or killed by the family," it said.

The report was issued at the end of 2006 and is the last U.N. study to touch on the subject.

"Gay men and lesbians in Iraq face a lot of risks right now, because homosexuality is sometimes interpreted by people in Iraq as being a Western import," said Scott Portman with the Heartland Alliance, a group that promotes human rights worldwide. "So they can sometimes be targeted by insurgent groups or militias, in part, because of animosity toward the West and, in part, because homosexuality is not well-accepted in Iraqi society."

He added, "the biggest threats right now are from militia organizations, who will attack and actually sometimes kill gay men and women."

Kamal and Rami say the dangers are all too real in Baghdad -- and they live in secrecy not to shame their families.

"I would rather commit suicide than allow my family to find out I am gay," Rami said.

Kamal said he often pretends to have girlfriends in social settings and tells his friends he's dating girls. "I am also careful with the way I dress -- not to show them that I am gay, especially my family."

What would his family do if they found out?

"They will force me to give it up, and I cannot do that," he said. "The 'normal' people cannot live in Iraq. Imagine how the life is for gays."

Rami added, "I do not know why people hate gays even though so many have this tendency. But still they hate it."

Homosexuality is a touchy subject for many Iraqis. When CNN asked Iraqis in Baghdad how they felt about homosexuals, we found intolerance to be widespread.

One man said he considers gays no different from "criminals and terrorists." Another claimed that homosexuality was "illegal under Islamic law, and [gays] should be punished by law like criminals."

Rami said he once fell in love with a man who was part of the Mehdi Army, a Shiite insurgent group loyal to the radical anti-American cleric Muqtada al-Sadr.

"One day he told me he would come over to my house and kill me in front of my family," Rami said. "I told him I would come outside and be killed in the street because I do not want my family to find out I am gay."

Both men hope to escape Iraq. They say their ideal destination would be San Francisco, California. For now, both of them keep their feelings secret.

Kamal is still tormented by what happened to him nearly three years ago.

"During my sleep, I only see nightmares, and I start crying. My family thought it was because they were beating me."

He paused. "Only my close friend Rami knows about this secret."

All About War and Conflict • Iraq War • Gay and Lesbian Relationships