(CNN) -- Palestinian refugees along the Iraq-Syria border are so desperate, they may accept a U.N. offer to go to Sudan, a country widely condemned for atrocities and genocide in its Darfur region. 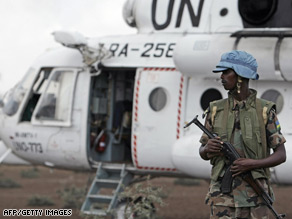 A Rwandan soldier serving with the U.N.-African Union peacekeeping force in Darfur guards a U.N. helicopter.

Al Tanf camp, where 400 Palestinian refugees are living, is appalling, according to the United Nations. The camp floods regularly, has poor sanitation and problems with garbage disposal.

Thousands of Palestinians fled Iraq during the war, when they were targeted by militias. Now they are caught in limbo, denied access to both Iraq and neighboring Syria. The U.N. High Commissioner for Refugees said the Palestinians would be resettled in the Sudanese capital of Khartoum, away from Darfur.

"They literally have nowhere else to flee and in many cases have been denied travel documents," he said. "The international community must act now to help these people. A safe haven needs to be found immediately, outside Iraq."

Washington-based Refugees International, founded in 1979, is asking the United States government to intervene and resettle the nearly 3,000 Palestinians in America.

The U.S. State Department has rejected the request, saying that the relocation plan is voluntary and that Sudan is the best option available to the UNHCR.

"The Palestinians being resettled in Sudan is obviously not an ideal or preferred solution," State Department spokesman Kurtis Cooper said. "But we accept the judgment of the UNHCR that it is preferable to the Palestinians continuing to be stranded in the border area in extremely dire circumstances."

But Sudan is one of the most violent places in the world. The International Criminal Court announced this week that it is seeking an arrest warrant against Sudanese President Omar al-Bashir for war crimes. The United States has accused the Sudanese regime of genocide in the killings in western Sudan where an estimated 200,000 have died and many more have been forced to flee.

The alleged crimes stem from a brutal counter-insurgency campaign the Sudanese government conducted after rebels began an uprising in Sudan's western Darfur region in 2003. The United States and much of the world has characterized the campaign as genocide.

Michel Gabaudan, the UNHCR representative in Washington, said that no final decision had been reached on the transfer to Sudan but that no other country had stepped forward to help.

"We have been blatantly unsuccessful in getting other countries to help," he said.

He described the plight of the Palestinian refugees as "dire circumstances," prevented from moving by both Iraq and Syria and with little water or access to services.

Kristele Younes, senior advocate with Refugees International, said the Sudan move won't offer a permanent, stable home and would simply move the refugees from one marginalized situation to another.

"The U.S. government should acknowledge the vulnerability of this stateless population and resettle them here," Younes said in a statement. "It is appalling that Sudan, a country infamous for its violations of international humanitarian law, has stepped in to protect these people when the U.S. would not."