JERUSALEM (CNN) -- Hamas leaders in Gaza are still committed to a cease-fire agreement with Israel despite numerous rocket and mortar strikes Tuesday, a Hamas spokesman said. 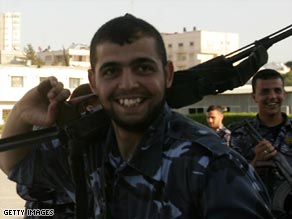 Hamas policemen were all smiles after the six-month truce was declared last week.

The Israeli military has not responded, but a spokesman for Israeli Prime Minister Ehud Olmert said the attacks could jeopardize the fragile truce, which took effect Thursday.

"It is clear that these rocket attacks present a grave violation of the understandings achieved by Egypt to achieve calm in the south," Mark Regev said.

Two Israelis received minor injuries when one of the rockets struck the southern Israeli town of Sderot, a frequent target of such militant strikes, Israeli ambulance services said. Another rocket struck the town, causing damage, and the third rocket landed in an open field, a police spokesman said.

An Islamic Jihad source said its militants fired the rockets in revenge for the Israeli killing of one of its commanders in the West Bank.

The rocket firings followed a mortar attack from Gaza into Israel earlier in the day that the Israeli military said marked the first reported violation of the truce.

No one was hurt, and the mortar shell did not cause any damage. There has been no reported Israeli response.

Israel said that under the conditions of the truce, the Hamas leadership in Gaza is responsible for all militant attacks on Israel, not just those carried out by Hamas militants.

Earlier Tuesday, the Israeli military said it killed a senior member of Islamic Jihad and another militant with him during a raid in Nablus, in the West Bank.

The senior militant, Tareq Jumaa Ahmed Abu Ghali, opened fire at the Israeli soldiers as they tried to arrest him, according to the Israel Defense Forces.

The soldiers fired back, killing Abu Ghali and the other militant, the IDF said.

The Egyptian-brokered cease-fire agreement is between Israel and Hamas leaders in Gaza and does not apply to the West Bank, which is controlled by the Palestinian Authority under President Mahmoud Abbas. The truce is supposed to last six months.

The terms stipulate that Palestinian militants stop attacks on Israel. Israel, in turn, will halt raids inside Gaza and ease its economic blockade if the truce holds.

Israel has repeatedly said that the truce is a first step toward a broader cease-fire agreement that must include the release of an Israeli soldier who was taken hostage two years ago.

A day before his trip to the Egyptian resort city, Olmert held "security consultations" with Dekel and Defense Minister Ehud Barak on how to expedite Shalit's release.