JEDDAH, Saudi Arabia (CNN) -- Saudi King Abdullah confirmed Sunday that his country will increase daily oil production from 9 million barrels to 9.7 million in the near future to counter the sharp rise in international oil prices. 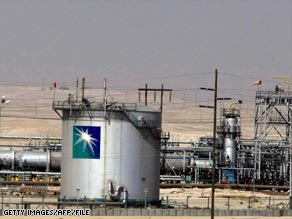 Saudi Arabia has announced an increase in oil production in a bid to ease the pressure on oil prices.

The Saudi petroleum minister, Ali I. Al-Naimi, said the country will reach the 9.7 million level by July. The announcement comes after Saudi officials announced modest increases.

It would be Saudi Arabia's highest production rate since 1981.

White House Deputy Press Secretary Tony Fratto praised the step, saying, "Any increase in production in today's oil market is welcome. It is important that we also take steps to increase domestic production and our refining capacity."

Meanwhile, the average price of gasoline in the U.S. rose nearly 10 cents in the past two weeks to almost $4.10 a gallon for self-serve regular, according to a national survey released Sunday.

The survey showed the national average was just a fraction of a cent under $4.10 a gallon, said survey publisher Trilby Lundberg. That is up 9.7 cents a gallon from the same survey two weeks ago, Lundberg said.

"Nice try, but no cigar. When gas is at $4 per gallon, demand increases almost daily, and the Saudis have millions of barrels per day more in spare capacity," he said.

Al-Naimi, the petroleum minister, also said the Saudi government will invest in oil projects that would allow Saudi Arabia to have the capacity to produce 12.5 million barrels per day by the end of next year.

King Abdullah's announcement came at the end of the Jeddah energy summit, where he also called for OPEC to set aside $1 billion for a strategy to ease the oil price crisis.

He said $500 million should be given to developing nations to help them get the energy they need.

King Abdullah said there are "many factors that made oil prices high." Along with increased demand, he also cited oil speculators and an increase in taxes in consumer nations.

"Now we see a lot of people point the finger at OPEC as it is solely responsible for this," he said.

"All nations must be better at conservation, and the U.S. is at the top of that list," said Bodman, who met with journalists ahead of the international meeting of oil producing and consuming nations focusing on high oil prices.

Some observers have blamed speculators for driving up oil prices. A key adviser to Saudi Arabia's oil minister said Friday that a number of factors, including speculators and currency fluctuations, are to blame for rising oil prices.

But Bodman said he did not believe that they are the cause. Since 2003, he said, global demand for oil has increased because of industry in China, India and the Middle East. But from 2005 to 2007, there was very little increase in supply.

"We spent 30 years digging ourselves into this hole," he said. "It won't be solved soon."

On Wednesday, President Bush asked Congress to permit drilling for oil in deep water off the U.S. coast to combat rising oil prices.

He also renewed his demand that Congress allow oil drilling in Alaska's Arctic National Wildlife Refuge, clear the way for more refineries and encourage efforts to recover oil from shale in areas like the Green River Basin, which encompasses parts of Colorado, Utah and Wyoming.