Truce takes effect between Israel and militants in Gaza 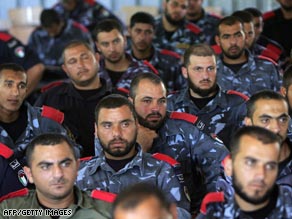 Two hours later, Israel partially lifted its economic blockade and allowed the transport of fuel into the area. If the quiet holds for a week, Israel will ease its restrictions on supplies further.

"There are no militants on the streets. We don't even see any policemen," said journalist Talal Abu-Rahmi. "It's been quiet."

It was a departure from a day earlier, which Israeli forces and Palestinian militants spent trading blows.

More than two dozen rockets were launched into Israel from Gaza on Wednesday, with Israel striking back with airstrikes.

Just an hour before the truce went into effect, an Israeli airstrike aimed at militants near the El Brag camp in the middle of Gaza killed one and injured three, Palestinian security and hospital sources said.

The Egyptian-brokered deal comes a year after the Palestinian Islamic party Hamas took control of Gaza from forces loyal to Palestinian Authority President Mahmoud Abbas. By agreeing to deal with Hamas through Egyptian mediators, Israel appears to be bending its policy of completely excluding Hamas.

The deal is supposed to last six months. The terms stipulate that Palestinian militants stop attacks on Israel. Israel, in turn, will halt raids inside Gaza -- and gradually ease its economic blockade if the truce holds.

Israel also has stressed that this week's cease-fire agreement is one step in a larger process that must include the release of Cpl. Gilad Shalit, an Israeli soldier who has been held hostage by militants in Gaza for two years.

If Shalit is returned, Israel will reopen its border crossings.

"The most important thing are the crossing points, that supplies come in," said Khalid Abdul Shasi of the United Nations Development Program. "Not only humanitarian supplies but also supplies for businesses. Raw material, medicine, fuel is very important."

"Gaza depends 90 percent on imports through Israel," he said. "Those supplies are extremely important for life to go back to normal."

By agreeing to deal with Hamas through Egyptian mediators, Israel appears to be bending its policy of completely excluding Hamas.

"The real question is whether the cease-fire will hold, how long it will hold, and whether it can be used to build upon and improve the situation and crisis," said Haim Malka of the Center for Strategic and International Studies.

But Meir Harash, a Jerusalem resident, told CNN he had "not a lot of faith" in the cease-fire -- "cautious optimism at best."

Israel excluded Hamas from peace talks, since the group refuses to recognize Israel's right to exist. Instead, it has dealt with the more moderate Palestinian Authority leadership in the West Bank.

But Palestinians voted overwhelmingly for a Hamas-led government during a U.S.-backed vote in 2006. Abbas dissolved that government after Hamas seized control of Gaza, which had long been under the control of Palestinian forces loyal to Abbas' Fatah Party.