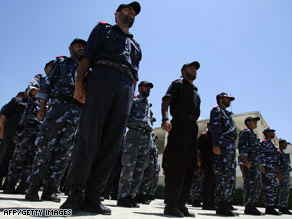 Israeli officials, however, stopped short of confirming that a cease-fire agreement has been reached.

"It's still early to announce an agreement of calm," Israeli Defense Minister Ehud Barak said in a statement. "When it starts, if it starts, it's hard to say how long it will last. The test will be how it's implemented."

On Sunday, Israel gradually will start to open its border crossing terminals, the Hamas officials said.

Asked about initial reports of a cease-fire, one Israeli official would not confirm whether an agreement had been finalized but said any truce would involve a sequential process.

Watch what truce may mean in Gaza »

The official said Israel would reopen some of its terminals along the Gaza border after calm had been established. He said Israel is still calling for the release of Cpl. Gilad Shalit as part of a broader cease-fire.

Egypt has been trying to broker a truce between Hamas and Israel for months. Militants in Hamas-controlled Gaza have pummeled Israel with thousands of rocket and mortar attacks, prompting Israeli military operations in the Palestinian territory.

Referring to the Egyptian mediation efforts, Barak said, "It's important to exhaust the possibility.

"The IDF [Israel Defense Forces] is prepared for any developments, but it is important to attempt to achieve a period of calm to bring back the peace and quiet for the [Israeli] people who live around Gaza in Sderot and Ashkelon and to try and renew negotiations for the release of Gilad Shalit."

Militants in Gaza have launched more than 2,300 mortars and rockets since the start of 2008, more than the 2,000 launched in all of last year, according to Israeli military figures.

While most of the attacks do not result in casualties, three Israelis have been killed in rocket and mortar strikes in recent weeks.

The Israeli military responds to the attacks by carrying out airstrikes and ground operations in Gaza that target militants, but many times lead to civilian casualties -- further inflaming the Palestinian leadership.

Israel also has restricted supplies of gasoline, diesel and electricity to Gaza, limited the amount of food and other goods entering the strip and made it virtually impossible for manufacturers and farmers in Gaza to export anything to the outside world.

Representatives from the rival factions met recently in Senegal for talks aimed at restoring the political and territorial split.

Earlier this month, Abbas called for "national unity" talks with Hamas with the goal of producing new elections for the Palestinians, who elected a Hamas-led Palestinian Authority government in a U.S.-backed vote in 2006.

Meanwhile, Abbas' Western-backed government is working toward a peace agreement with Israel.

The Bush administration has said it wants the two sides to reach an agreement by the end of the year.