Iraqi, American death tolls down in May

BAGHDAD, Iraq (CNN) -- The number of deaths among Iraqi civilians, police and insurgents fell sharply from April to May, according to data from the Iraqi government, and the monthly death toll for American troops hit its lowest mark since 2004 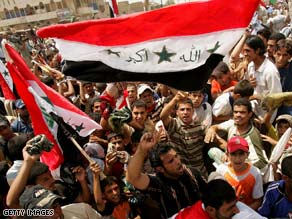 The number of Iraqi police killed also plummeted to 32, or fewer than half of April's death toll for Iraqi police.

The number of Iraqi soldiers killed fell only slightly, from 38 to 27, the data showed.

The monthly American death toll in Iraq also ebbed in May to a near-record low.

As of Saturday, the death toll for American troops stood at 21, the lowest since February 2004, when 20 troops were killed. Included in the death toll was a U.S. Marine who died Friday in an incident that was not combat-related.

The numbers appeared to support testimony last week from top U.S. military commander in Iraq, Gen. David Petraeus, who said that recent operations in three Iraqi cities have "contributed significantly to the reduction in violence."

"In the past week, security incidents decreased to levels we have not seen since March of 2004. These figures reflect a decrease in attacks of some 70 percent since the surge operations began in June of 2007," he said.

Last year, the civilian death tolls were much higher as Sunni and Shiite sectarian violence and fighting between insurgents and troops raged. But the tolls began dropping in the summer.

The statistics were released even as violence broke out in the last few hours of the month. On Saturday night, a suicide car bombing in al-Anbar province killed 10 people, six of them police, an Iraq Interior Ministry official said.

Another five police and seven civilians were injured in the bombing in the town of Hit, on the outskirts of the Navea Training Center, an Iraqi military post.

Authorities announced a vehicle ban in Hit to prevent more attacks, the official said. The town is a former al Qaeda stronghold.

Elsewhere in Iraq, an attack with an improvised bomb killed three Iraqis, including a child, and wounded seven Saturday in Baquba, the U.S. military said. Baquba is north of Baghdad, in Diyala province, which borders Iran.

The incidents occurred one day after Iraqis took to the streets to protest a possible long-term security agreement between Iraq and the United States.

Shiite and Sunni Muslim leaders in Iraq, who rarely agree on anything, are united in their opposition to the prospective plan.

Many Iraqis suspect that the potential agreement could lead to the establishment of bases, a long-term presence of American troops and a weakening of Iraqi government control.

Powerful Shiite cleric Muqtada al-Sadr has said that any such agreement should be put to a popular referendum, a position reflected in demonstrations in several Shiite Baghdad neighborhoods Friday.

Watch protesters take to the streets »

"From the beginning, we were and we still insist on the importance of not having any resolution that can challenge our national sovereignty," al-Hakim said.

Vice President Tariq al-Hashimi, a leader in Iraq's largest Sunni Arab bloc, worries that a security agreement could compromise Iraqi sovereignty, which he calls a "red line that should not be bypassed."

A U.S. diplomat in Baghdad tried to allay those fears.

"These are bilateral negotiations between two sovereign countries," U.S. Embassy spokeswoman Mirembe Nantongo said. "As with all negotiations, the resulting agreement will have to satisfy the interests of both countries. Our focus is to achieve an agreement that is fully consistent with Iraq's sovereignty."

The countries have not publicly discussed details of the talks. If an agreement is reached, Nantongo said, it "will set the legal framework for the continued drawdown of U.S. troops" and replace the parameters set by the U.N. Security Council mandate that expires in December.

Kouchner is expected to visit the northern city of Irbil, the capital of the Kurdistan region, where he will open a branch office of the French Embassy, the French ministry said.

"It will be an opportunity for the minister to confirm that France is standing by all Iraqi communities in order to help with national reconciliation," the French ministry said.