LONDON, England (CNN) -- Events commemorating the bombing of an American airliner over the Scottish town of Lockerbie were taking place Sunday in both the UK and the U.S. to mark the 20th anniversary of the attack which killed 270 people. 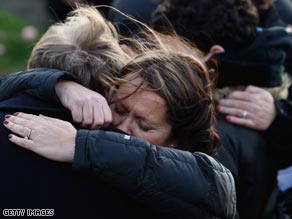 Mourners gathered at a wreath-laying ceremony Sunday to mark the Lockerbie bombing.

All 259 people on board Pan Am flight 103 from London to New York were killed when the plane exploded in midair on December 21, 1988. A further 11 people died on the ground as debris rained down on Lockerbie.

In Scotland, mourners watched as a commemorative wreath was laid at Dryfesdale Cemetery, the site of a permanent memorial and remembrance garden to the victims of the attack.

Canon Michael Bands, who led the service, said that the disaster had "long ceased to be a Lockerbie event and become a world event."

"It is awful that we should gather today on this stormy sort of day to feel the sadness again of the tragedy that took place here 20 years ago," Bands said, according to the UK's Press Association.

Services marking the exact time of the attack at 1903 GMT were also due to take place later in local churches. A private service for relatives of victims and former Pan Am employees will also take place at London's Heathrow airport, where the airliner began its final flight.

In the U.S., remembrance services were scheduled to take place at Arlington National Cemetery and at New York's Syracuse University, which lost 35 students in the bombing.

Scotland's First Minister Alex Salmond said the anniversary marked an opportunity to reflect on "the lasting links that have been established with those in other nations who were touched by the disaster."

"I know that through the events being organised in Lockerbie, at Syracuse University, and at other locations in the UK and the U.S., that fitting tribute will be paid to those who so tragically lost their lives and those, in the south of Scotland and beyond, whose lives have been affected by the atrocity."

A former Libyan intelligence officer, Abdelbaset Ali Mohmed Al Megrahi, was convicted of the bombing in 2001. Al Megrahi, who is serving a life sentence in Scotland's Greenock Prison, last month lost an appeal to be released because he is suffering from advanced prostate cancer.

Al Megrahi has always denied any involvement in the bombing. He was convicted after prosecutors argued he had placed the bomb, hidden in a suitcase, on a flight from Malta to Frankfurt, Germany.

There, prosecutors said, the bomb was transferred onto the Pan Am jet that went first to London's Heathrow Airport and then was to continue to New York.

The prosecution maintained that Megrahi, who worked at Malta's Luqa Airport, was an agent for the Libyan intelligence services and had been seen buying clothes that were in the suitcase that contained the bomb.

In 2007 Scottish judges granted Megrahi the right to make a second appeal against his conviction on grounds that he may have suffered a miscarriage of justice. That process is ongoing.

The north African country has paid out more than $500 million to the families of victims of the attack as part of a wider $1.5 billion settlement to end its legal liability in U.S. terrorism cases and restore diplomatic full relations with Washington.

All About Lockerbie • Moammar Gadhafi • Libya