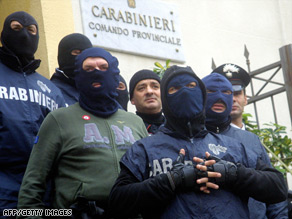 Members of the caribinieri outside their Palermo HQ Tuesday following raids against Sicilian mafia suspects.

More than 1,200 Italian carabinieri, backed by helicopters, took part in the operation and arrested 89 suspects, added Colonel Teo Luzzi, the head of the carabinieri in the regional capital Palermo.

The operation began at 3:30 a.m. (9:30 p.m. ET Monday) and was still going on at midmorning. Palermo officials said charges would include association with the mafia, extortion, and arms and drug trafficking.

"Their aim was to reconstitute the Sicilian mafia's decision-making body, known as the "commissione," which was disbanded in the early 1990s following the arrest of the top boss Toto Riina," Luzzi said.

The commissione was the executive body of the mafia, uniting the most powerful bosses of the mafia clans operating in Sicily. It was the commissione that decided to carry out the killings of Italy's top anti-mafia magistrates in May and July 1992.

The high-profile killings prompted the Italian government to deploy the army in Sicily to fight the mafia, and Toto Riina was arrested in January 2003.

"Since then the mafia didn't really have a decision making body," Luzzi said, "and with these arrests we decapitated the top brass of the Palermo mafia."

Luzzi also said that Sicily's most wanted Mafioso, Matteo Messina Denaro -- who has been on the run for more than a decade and leads a clan in nearby Trapani in western Sicily -- is not among those arrested.

"But those whom we did apprehend were associated with him and were trying to create a new decision-making body at his request," Luzzi said.