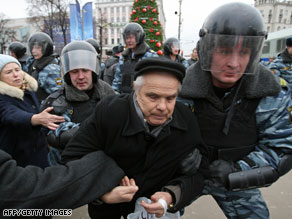 Police detain a demonstrator at a political opposition rally in Moscow.

Eduard Limonov, a founder of an opposition coalition called The Other Russia, was also among the organizers, the Russian news agency Interfax reported.

"They were only separate attempts of hooligan and illegal actions, which were timely cut by police officers," the agency said, quoting Moscow police public affairs officer Viktor Biryukov.

The detainees were taken into custody as they approached Triumfalnaya Square in central Moscow.

The Other Russia's Web site said Kasparov and about 200 other opposition members met Friday and Saturday outside Moscow, "finalizing a new movement, which aims to peacefully dismantle what they describe as the illegitimate regime ruling Russia."

Kasparov, who is chairman of the United Civil Front party, "said it was impossible to reform" the regime of President Dmitry Medvedev and Prime Minister Vladimir Putin, according to the Web site.

Kasparov said the country's worsening economic situation was putting Russia "on the edge of catastrophe."

A spokesman for Moscow City Hall told Interfax Kasparov and Limonov had been offered places to hold a rally, "but they again deliberately staged provocations and called on their supporters to attend unauthorized events."